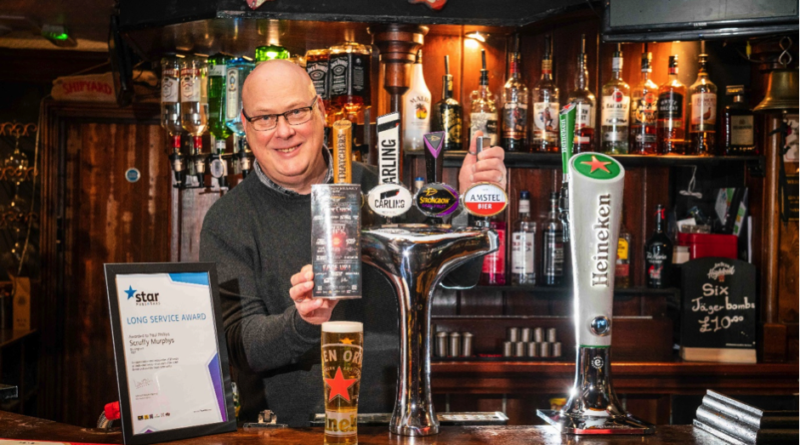 The founder of an iconic Birmingham music venue, popular with rockers from across the globe, has received a prestigious award to mark its 20th anniversary.

The award was presented to Paul Phillips of Scruffy Murphys on Newton Street by the building’s owners’ Star Pubs & Bars. It recognises the contribution the venue has made to Birmingham’s music scene during the past two decades.

Scruffy Murphys is celebrating its 20-year milestone by holding its first rock festival since restrictions lifted. Well-known rock bands from around the UK are booked for the three-day event, which runs from 26th to 28th November.

Birmingham born-and-bred Paul – who was previously in the car industry and had no musical experience – took over Scruffy Murphy’s in 2001, when it was an unloved Irish bar. Spotting a gap in the market for a rock venue, he transformed the building into a ground-floor pub and basement event space kitted out with a stage and top-of-the-range professional sound and lighting equipment. Since then, Scruffy Murphys has won a worldwide reputation and hosted over 5,500 rock and heavy metal bands from as faraway as Australia, Singapore and America. Big name acts, such as Foggy Molly and Acey Slade of Murderdolls fame, who would normally perform to crowds of 5,000, have stopped off to perform at the 130-capacity venue whilst touring the UK. Rock legends such as the Red Hot Chili Peppers, Noddy Holder and Lemmy of Motörhead have visited the pub as customers.

Says Paul: “It’s been a tough 18 months for everyone. Hospitality and entertainment have been particularly hard hit. The price of closing was eye-watering. It’s the support and encouragement of our followers that has got us through, I can’t thank them enough. At our lowest point, they even raised more than £4,000 to help. When we started out, Birmingham had many more venues like Scruffy Murphys. Now there are only a couple of us left.

“I never thought I’d still be here 20 years on. I couldn’t have done it without the backing of a fantastic team of staff. We’re now serving children and grandchildren of some of my original customers. The festival is a big thank you to our followers and will hopefully mark the start of another 20 years of music at Scruffy Murphys. Having got through three lockdowns, our next goal is to see some new superstars start their careers here.”

Adds Star Pubs & Bars’ area manager, Jacqueline Frow: “It’s an honour to present this award. Paul has put his heart and soul into Scruffy Murphys and built it into one of the best independent rock pubs and music venues in the UK. It’s a real Birmingham institution and adds to all the city has to offer. It’s been the most challenging period the live music industry has ever known. It’s a tribute to Paul that Scruffy Murphys has survived and thrived. We wish him many more happy years at the helm!”