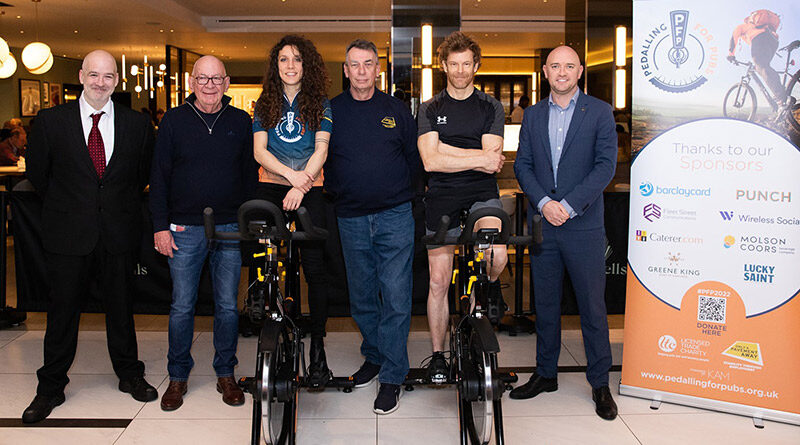 Chef Tom Aikens and a host of hospitality heavyweights worked up a sweat this morning at Strand Palace in London, as they kicked-off a 4,891km virtual cycle from London to Jordan in the Middle East, in support of the UK pub, bar and licensed trade sector.

The virtual ride has been organised to support the 26 hospitality professionals who will be embarking on an epic, 335km real-time ride across the mountains and desert of Jordan in the Middle East, from 10-15 March, to raise critical funds for two ground-breaking charities; Only A Pavement Away and Licensed Trade Charity. These intrepid individuals have raised nearly £230,000 to date, in what is one of the biggest fundraising initiatives ever seen in the industry to help some of the people most affected by the pandemic.

Rooted in hospitality, both charities stage phenomenal interventions for people facing homelessness, joblessness, health issues and financial hardship. They have been fundamental in helping those who have faced personal crisis – and could still lose everything as a result of the pandemic – get back on their feet.

Pedalling furiously alongside Aikens at Strand Palace this morning, was Paul Hannaford, Goods Receiver at The Ivy Asia, who found a career in the hospitality sector through the work of Only A Pavement Away, Dolores Panetier, Senior Relationship Manager at Only A Pavement Away, who will be taking on the tricky of Jordan later on in the week, Greg Mangham, Founder, Only A Pavement Away, Jim Brewster, CEO, Licensed Trade Charity and Benjamin Chapman, Cluster Commercial Director, Strand Palace, who together kicked off the cycle.

At the same time, hundreds of workers in pubs, bars, restaurants, breweries and offices across the country have formed teams to begin their own virtual bike ride and contribute to the total 4,891km target, either on a static bike in the workplace, or outdoors. Workplace teams from Punch Pubs, Barclays Payments, Wadworths Brewery, Incipio, Mitchells & Butlers, Banwell House, HIT Training, Bums on Seats and ABInBev are pedalling round the clock over the next week to hit the distance target and raise crucial funds.

“We want to mirror the efforts of the cyclists out in Jordan who will be encountering some very difficult conditions and tricky terrain, and raise even more money for two charities that support those in our sector who are facing tough times, says Tom Aikens, Michelin-starred chef and restauranteur, of the virtual ride.

Paul Hannaford, Goods Receiver at The Ivy Asia, continues: “I’m not really a cyclist, but I wanted to show my appreciation for the great work that charities such as Only A Pavement Away and Licensed Trade Charity are providing for people like me who were homeless or living in precarious conditions. They helped me to get a job in and get back on my feet, and so this morning, I’ve clocked up 10km towards the target and I’m really proud of my results both on and off the bike! Good luck to all the riders embarking on a challenge this week.”

“We’ve seen huge growth in the number of people contacting us for help, especially for the mental wellbeing support we offer, which is why we’re so thankful to everyone who has ‘got behind the bar’ to pedal for our pubs.”

Greg Mangham, CEO and founder of Only A Pavement Away, concludes: “We really appreciate the effort that our sector colleagues and partners such as the Strand Palace have put in to help us to raise much needed funds to provide information, support and employment opportunities for people facing difficult times.”

To donate, please go to www.justgiving.com/campaign/pedallingforpubs2020.