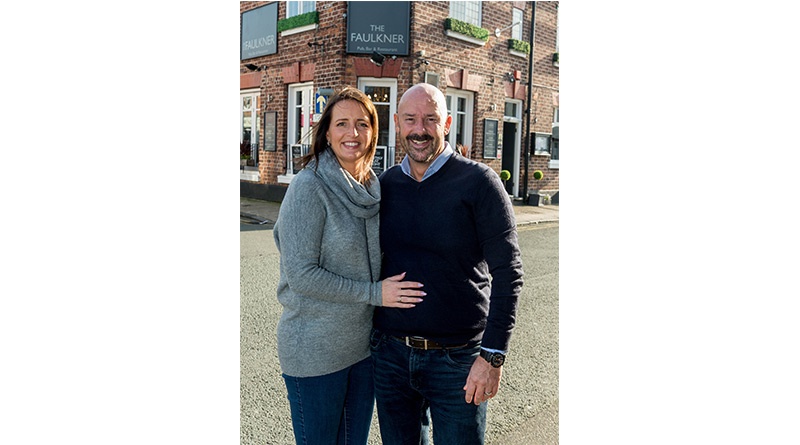 Chef-licensee Darren Lea and his wife Kelly have received the Star Award for Best Food Pub for The Faulkner at Hoole in Cheshire.

Run by Heineken-owned Star Pubs, the Star Awards include sixteen categories ranging from Most Family Friendly to Best Wine pub.

The Best Food Pub finalists were judged against stringent criteria including quality, presentation and service. The Faulkner was described by the judges as “a great dining experience that offers restaurant quality food at pub prices and a menu that will appeal to everyone.”

The Faulkner was singled out for using locally sourced ingredients from named suppliers and for making everything – bar the bread, chips and pâté – from scratch. The judges commended the pub for its regularly changing menu and seasonal produce, which ensure there is always something new for regulars to try. As well as offering à la carte specials, The Faulkner has popular home-made pizza and burger nights and runs tasting nights featuring cuisine from around the world.

The Awards night was held at the five-star Luton Hoo Hotel in Bedfordshire. Attended by 250 people, it was hosted by actor, comedian and presenter Joel Dommett. Representatives of 90 finalist pubs were recognised at the night and crowned regional winners.

The 10-month judging process involved pub visits as well as interviews with licensees and their staff. The judges reported that standards across the board were the best they had seen since the Star Awards’ launch in 2012 and noted particular advances in the food, soft drinks, spirits and wine categories.

Says Star Pubs & Bars managing director Lawson Mountstevens: “Pub goers demand more than ever and the Star Awards winners and finalists demonstrate how licensees are stepping up their game to deliver fantastic experiences across all categories and occasions. With 2,500 pubs in the Star Pubs & Bars estate, the competition was intense. It was a tremendous accolade to all the winners and finalists to be nominated. They are raising the bar and creating outstanding, individual pubs that are much-valued and loved by the communities they serve.”