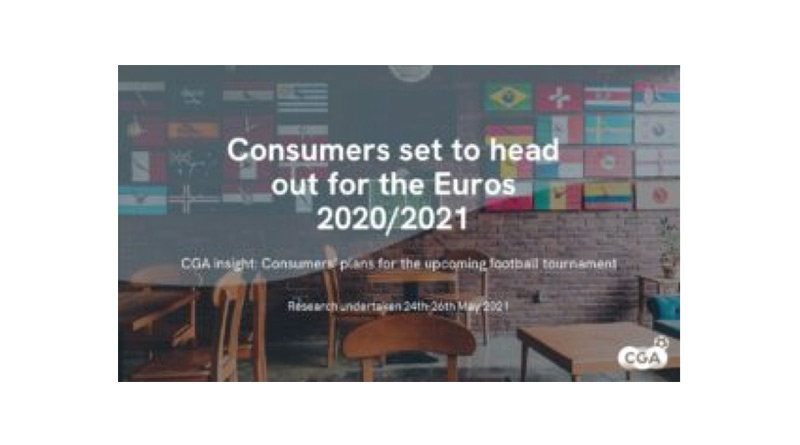 Three in ten (30%) UK consumers plan to watch games in football’s upcoming Euros in a pub, bar or restaurant—a reminder of the major potential of live football for the On Premise, despite the current restrictions.

CGA’s latest consumer research shows that just over half (54%) of this potential Euros market is aged between 25 and 44, with a 50:50 gender split. Many of the fans are already high engagers with the On Premise, with nine in ten (90%) having already returned to venues since the start of indoor service on 17 May.

Pubs and beer tend to feel the greatest benefit from major football tournaments, and lager is the category of choice for around a third (32%) of those who plan to watch the Euros while drinking—five percentage points higher than the proportion choosing it since reopening.

CGA’s consumer research highlights the large window of opportunity on match days. Almost a third (30%) of On Premise Euros viewers plan to start their visits before kick-off, and 15% intend to stay after the final whistle. Nearly two thirds (62%) think they will visit at least one other venue either before or after matches.

The Euros tournament runs from Friday 11 June, when limits around distancing and table service in pubs, bars and restaurants will still be in place; and ends on Sunday 11 July, when all restrictions are currently scheduled to have been lifted. Matchdays involving England, Scotland and Wales will provide the biggest opportunities—though nearly three in five of the consumers watching in the On Premise say they will also watch games involving other countries.

“Football tournaments are always good news for pubs and beer brands in particular, and with all three home nations taking part there will be some great opportunities right across Britain,” says Rachel Weller, CGA’s director of consumer research and marketing. “However, with COVID restrictions still limiting socialising, operators and suppliers are going to have to work hard to tempt people away from their sofas. They will also be hoping that England, Scotland and Wales can all progress well into the schedules, opening the door for more visits when restrictions hopefully end.”