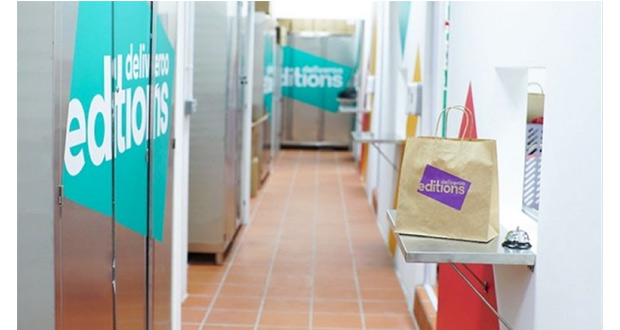 Deliveroo today announces that it has set up a new team within its HQ that will focus on identifying restaurants in need of support to offer them a place in a local Editions delivery-only kitchen.

Deliveroo’s new ‘Restaurant Rescue Team’ will look for restaurants that are at risk of closing, or who have closed down, who would be able to continue trading with support from the Deliveroo Editions kitchens:

For a limited period, the restaurants who enter Editions through the Rescue Team will also receive support which is not available to other restaurants on the platform, to help maximise the benefit of moving into a delivery-only kitchen. The selected restaurants will enjoy preferential commission rates, and Deliveroo will cover the costs of rent, equipment, maintenance, utilities, food safety setup and audit costs.

Deliveroo already has a track record of helping restaurants on the verge of closing, or who have closed, and giving them a new lease of life in an Editions kitchen.

After moving to the UK from Lebanon and working in the restaurant sector, Fadi Chafe founded Waleema – a modern Lebanese restaurant. However, the costs of running a restaurant meant this had to close. Waleema moved to Deliveroo Editions in November 2017, allowing Fadi to continue his business and trial new dishes, without the risks and capital costs of opening a restaurant. As a result, Waleema has expanded to multiple locations – including Deliveroo’s Whitechapel and Battersea Editions sites – creating new jobs for local chefs in the process.

“Editions minimised risk and provided a smoother entry into the market. Editions saved Waleema at a vital time. This is a great lifeline to any restaurant and an opportunity we would encourage people to take up.”

Chinese restaurant The Good Earth was trading in West Hampstead for over 20 years but despite strong sales the site had to close due to the on-going challenges hitting the restaurant industry. This was their first closure in 40 years since the brand started. In order to maintain their presence in the area and keep staff with the company, the restaurant decided to join Editions in Swiss Cottage – just two miles away from their original site. With minimal downtime and close location, it ensured that The Good Earth could continue providing its signature dishes to local residents.

“Joining Deliveroo Editions was an easy decision for us as it meant there was little upfront cost without the risk of a high capital expenditure typically required to set up a new business. The closure of our West Hampstead site was not easy but at least now we can be assured of continued employment for a few of our staff.”

This new initiative comes as the restaurant industry has faced a number of economic challenges in recent years, which have put a strain on their finances, from rising business rates to increased food and labour costs. In a highly competitive market, this means that even the most popular restaurants and well-established brands are running into financial difficulties. Indeed, the number of restaurants becoming insolvent rose by a third in 2018. Deliveroo will focus its efforts initially in London and then expand to other areas of the UK.