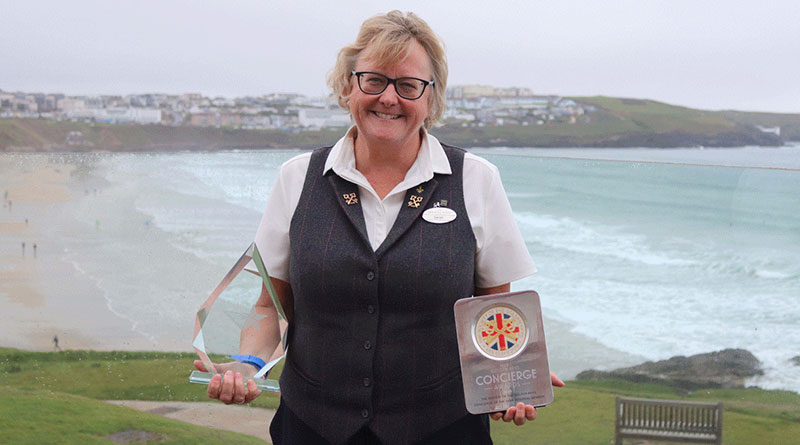 A concierge from Cornwall’s only double-five star hotel has received two industry awards for her commitment to guest experience and quality of service.

Held on 15 October at Hilton Olympia, the Boutique Hotelier Personal Service Star Awards celebrates individuals from independent hotels across the United Kingdom who consistently strive to provide their guests with the best possible experience.

The 15th annual MVP Golden Keys Concierge Awards, which were held on 24 October at the Park Plaza, recognise high achievers from the 400-strong British contingent of Les Clefs d’Or, or The Society of the Golden Keys.

Sarah said; “I am thrilled to have received these two awards from such well-respected industry organisations, particularly in such quick succession.

“I love the role of concierge. I’m one of the first people to meet guests when they enter The Headland, and so I set the tone of their stay. Every day is a pleasure, and hearing the words ‘thank you Sarah’ makes me grin from ear to ear every time.”

Sarah, who lives in Newquay, has worked at The Headland for eight years. Starting as a hotel porter, her passion to help guests and enhance their stay shone through, and she naturally leant towards the position of concierge.

In her current role, Sarah performs a variety of tasks for guests; from booking taxis, restaurants and private jets, to supporting marriage proposals on the beach.

Darryl Reburn, managing director, said: “We were so pleased when Sarah received these awards for her efforts. She works very hard to exceed guests’ expectations, and deliver the five star experience for which The Headland has come to be known.

“There is no challenge too large or small for Sarah – in fact, the greater the challenge, the better she performs.”

2019 has been a busy year for Sarah, who in June was accepted into Les Clefs d’Or. A professional association of hotel concierges with approximately 4,000 members across 80 countries, Sarah is the only member in Cornwall and Devon, and one of only 19 female members in the United Kingdom.

During her time at The Headland, Sarah has been a keen advocate of the hotel’s talent development programme, which supports ambitious employees who are motivated to excel in their careers within the hospitality industry.