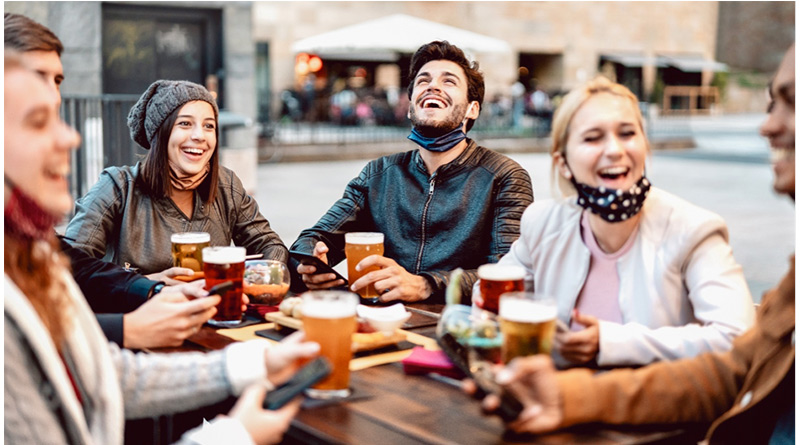 The data reveals how footfall recovered to 28% of levels seen in the same week in April 2019, despite fewer than one quarter of licensed venues choosing to open due to the outside only trading rules[i], suggesting that consumers were confident and excited to visit pubs and restaurants for the first time this year.

Friday 16th April was the busiest day of the week, with footfall recovering to 31%[ii]. This was followed by Monday (12th) – the first day pubs, bars and restaurants could open – and Sunday (18th), which both recovered to 30%.

The data reveals that people aged 56 and over were twice as active last week, contributing to 10% of all Wi-Fi log-ins. This suggests that the vaccine rollout has increased consumer confidence significantly compared to the return to trade after previous lockdowns, where older age groups were much less represented. The age group made up just 5% of log-ins when the sector reopened in July and again in December, following the previous lockdowns, suggesting people were twice as confident last week, most likely due to the success of the vaccine rollout.

When analysed by demographics, the figures reveal that 56% of Wi-Fi venue log-ins over the past week were made by men, which is a seven-percentage point increase compared to the same week in 2019.

Julian Ross, CEO and founder of Wireless Social, said: “For operators fortunate enough to have outside space, the last week has been a much-needed and well-deserved boost. People are desperate to get out and support their favourite pubs and restaurants and our data, along with the fact that sales were up 60% on 2019 levels, proves this, with footfall hitting the highest levels our high streets and venues have seen in months.

“There’s a long way to go, particularly for the venues that are relying on the next phase of the roadmap permitting indoor drinking and dining on 17 May, as well as those in Scotland, Wales and Northern Ireland, but we are so excited to be working with our customers to support and champion them as they return to trading.”