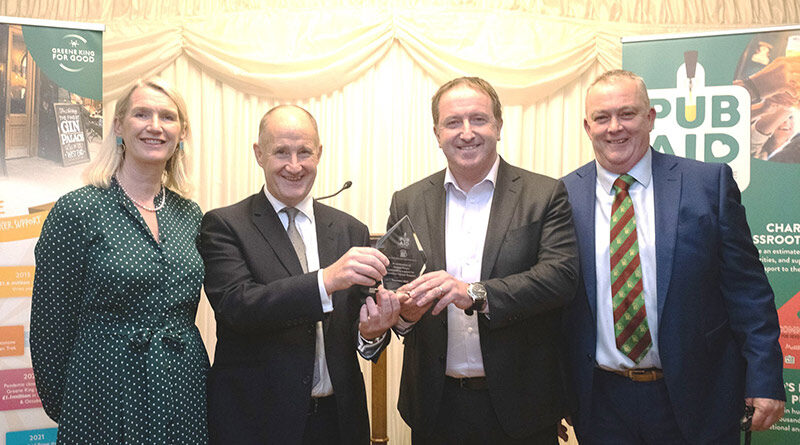 PubAid and the All-Party Parliamentary Beer Group (APPBG) have celebrated Greene King’s outstanding achievement in raising more than £13 million for Macmillan Cancer Support, presenting the brewer and pub operator with a trophy at a special reception in the House of Commons.

Greene King has raised the impressive sum over the past decade, through a range of activities in pubs, from hosting cake sales, raffles, quizzes, family fun days and more, as well as company-wide fundraisers such as its Macmillan May initiative.

The Rt Hon Alun Cairns MP, Chairman of the APPBG, said:
“It is a real pleasure to join PubAid and my parliamentary colleagues in the APPBG in congratulating Greene King for this laudable achievement. Their efforts will have helped Macmillan nurses and other professionals to provide much-needed support to people living with cancer across the country.

“Everyone involved in this fantastic team effort should be very proud of what they have achieved.”

PubAid President Keith Bott said: “It’s hard to think of a better showcase for how pubs can be a force for good in their communities, and society more broadly. Every pound raised in a Greene King pub is a testament to the determination of its licensees, managers, team members and customers to make a difference to this worthy cause.
“It’s doubly impressive that Greene King refused to let the lockdowns of the last few years derail their mission to support Macmillan; in fact they managed to raise an amazing £1.2 million in September and October 2021 alone. Their dedication is an inspiration to the thousands of other pubs in the UK who together raise more than £100m every year for charities and worthy causes.”

Kevin Hollinrake, Minister for Enterprise, Markets and Small Business, including the hospitality sector, presented the trophy to Greene King CEO Nick Mackenzie, who said:
“The real reward for our fundraising comes from knowing that our efforts are providing support for people with cancer, when they need it most, and I’d like to thank our team members and customers for their unwavering energy in raising money for Macmillan. We are grateful for this recognition from our peers in the pub industry and our thanks to PubAid and the Beer Group for this award. Greene King is proud to be a patron of PubAid, which has done much to promote a positive narrative around pubs over recent years.”

PubAid celebrates pubs as a force for good in their communities, promoting not only their fundraising work, but also support for grassroots sports, estimated to be worth £40m every year. Working with the APPBG and with sponsorship from Matthew Clark, PubAid runs an annual Community Pub Hero Awards scheme, recognising those pubs who go the extra mile to support their local communities and charities. The 2022 Awards have just closed, attracting close to 200 entries including 60+ nominations from MPs.