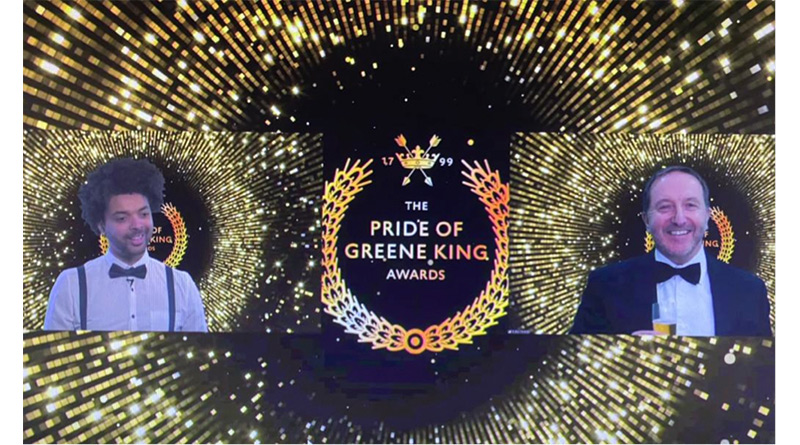 Greene King team members celebrated their 2020 successes following the challenge of a pandemic at the Pride of Greene King Awards ceremony last night.

The UK’s leading pub company and brewer held the virtual awards, hosted by CEO Nick Mackenzie and comedian and Virgin Radio presenter Johnny Cochrane, which recognised teams and individuals for their outstanding achievements.

The awards, based on each of Greene King’s five values, recognised the stars of the company, along with honours for Team of the Year, Outstanding Contribution and the Happiness Award.

Winners include the Kings Arms pub team in Bagshot, who won the We Care award for playing a pivotal role in supporting the lives of their locals, including raising £2,000 to provide free Christmas Day meals to those who were struggling. The overall Team of the Year award was voted for on the night by Greene King employees and the prize went to the Chef & Brewer team, who were nominated for their amazing work when pubs were able to reopen last year.

Nick Mackenzie, CEO of Greene King, said: “2020 was a really tough year but we wanted to recognise our teams and individuals for their outstanding examples of commitment and brilliance. We’ve seen incredible stories all around the business of our teams doing really great things in their communities during lockdown and felt it was important to celebrate some of the amazing things that happened during an extraordinary year.

“Even though we are currently in lockdown, we were determined to make the awards a great night to remember and give our team members a night ‘out’. It was great to see so many of our people dressed up for the occasion and celebrating virtually with their teams. We really have the best people in the industry, and I want to congratulate the finalists and winners for their honorable achievements.”