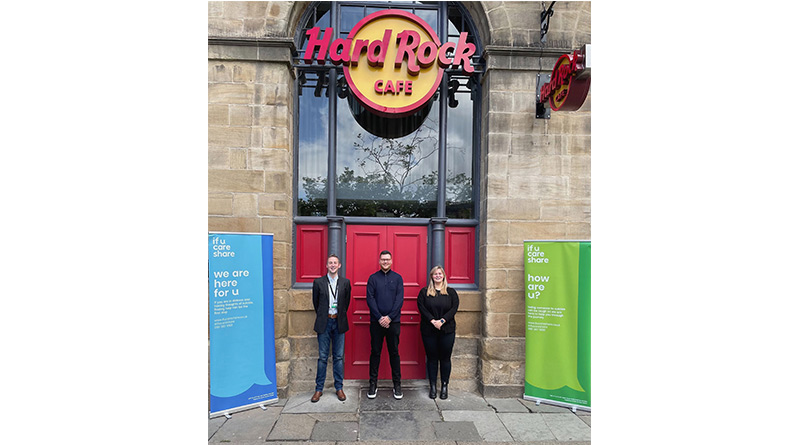 The North East’s first Hard Rock Café has unveiled its plans to support a regional charity which does vital work in suicide prevention, bereavement support and promoting positive mental health.

The cafe, based at The Guildhall at Newcastle Quayside, opened in May and has already become a huge success.

And now it has unveiled its plans to help If U Care Share – a charity which was set up to deal with the growing problem of people taking their own lives and to offer support to their family and friends.

The North East has one of the highest suicide rates in the country and is the main cause of death of men under the age of 45 and young people aged under 25.

The team at Hard Rock Newcastle have recognised the importance of the work of the charity and is now working with If U Care Share to come up with a number of fund-raising and awareness initiatives which will take place throughout the year.

The charity was set up following the death of County Durham teenager, Daniel O’Hare, who took his own life at the age of 19 in 2005.

His devastated family had no idea that he was feeling suicidal and set up the charity in his memory, to help other people struggling with their mental health to get the support and help they need.

Since it was established If U Care Share now work across the whole region and has supported more than 2000 people who are at risk of taking their own lives or have been bereaved, along with working with more than 50,000 young people to promote positive mental health.

Matty Wilson, Sales and Marketing Manager at Hard Rock Newcastle said the cafe was glad to be able to support such an important charity.

“There are so many people that are struggling in silence and don’t realise that there is some real help available,” said Matty.

“If U Care Share does some fantastic work in supporting people through what can be the darkest time of their lives and we are glad to have the opportunity to help them and raise awareness of what they offer.”

Dominic McDonough, Fundraising and Event Manager at If U Care Share said the charity was “delighted to be working with the Hard Rock team who have been so kind and supportive of the charity.”

“This is a great opportunity, not just to fundraise to support our life-saving work, but also to get people talking about this incredibly important issue,” he said.

“ We know that talking can save a life so the more conversations that we can start the better and working with Hard Rock is an amazing way to achieve this.”

Since it opened its doors in May, Hard Rock Newcastle has been a huge hit, with diners flocking to the transformed Grade 1 listed building which can take up to 180 covers which is also now home to a huge range of music memorabilia and a rock shop.