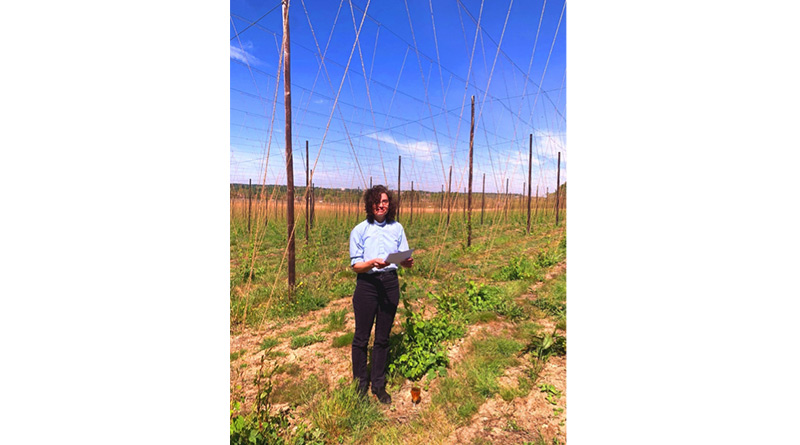 Surrey-based Hogs Back Brewery is celebrating its annual hop blessing despite lockdown, with a ‘virtual vicar’ conducting a socially distanced ceremony shared via the brewery’s website and social media channels.

Rev. Claire Holt, of St Paul’s Church in Tongham, where Hogs Back is based, officiated from the hop garden next to the brewery, accompanied – at a safe distance – by owner Rupert Thompson and a handful of team members who recorded the ceremony.

The hop blessing is being broadcast today, Ascension Day (21 May), which was traditionally a day when crop blessings were held. Last year, around 200 people gathered at the brewery for the celebration, enjoying an evening among the growing hop bines with a pint of Hogs Back TEA (Traditional English Ale). This year, the virtual version is being shared with 25,000 people, including Hogs Back social media followers and members of the brewer’s Tongham TEA Club of loyal local drinkers.

Thompson said: “The hop blessing was so popular last year that we were determined it should go ahead despite lockdown. We’re grateful for the support of Rev. Holt, who also conducted last year’s blessing, and the blessing of our original, smaller hop garden in 2014.

“We are delighted to be involving our local community with the event via social media.  It’s not quite the same as standing in a sun-filled hop field with friends, but we’re pleased we were able to continue this annual tradition.

“Happily, our hops have not gone into lockdown, in fact the recent warm weather has encouraged healthy growth and we’re hopeful of a bumper harvest in September.  We’re also hopeful that we may be able to hold a real Hop Harvest Party rather than a virtual one – even if it has to be smaller scale and socially distanced.”

Rev. Holt said: “Like everyone else, St Paul’s Church has adapted to lockdown, and I’ve become a ‘virtual vicar’ to my congregation. I was pleased that Hogs Back were able to adapt their hop blessing, and happy to lead prayers for the hop garden, the brewery, and all who work in them.

“Ascension Day was traditionally chosen for crop blessings as by this time in the year, new growth would be shooting up – as we can see in the hop garden today. Traditionally, a group of young and old people, usually led by the priest, would walk round the boundaries of the parish, stopping at each boundary post to pray for the protection of the crops.”

With the hops now blessed, the Hogs Back team led by estate manager Matthew King, will now be tending the bines carefully to encourage a healthy harvest in September. Three varieties are being grown in the new garden: Fuggles – used in the brewer’s flagship TEA ale; Cascade – used in its Hogstar Lager; and Farnham White Bine – a local variety that they have revived from near-extinction.