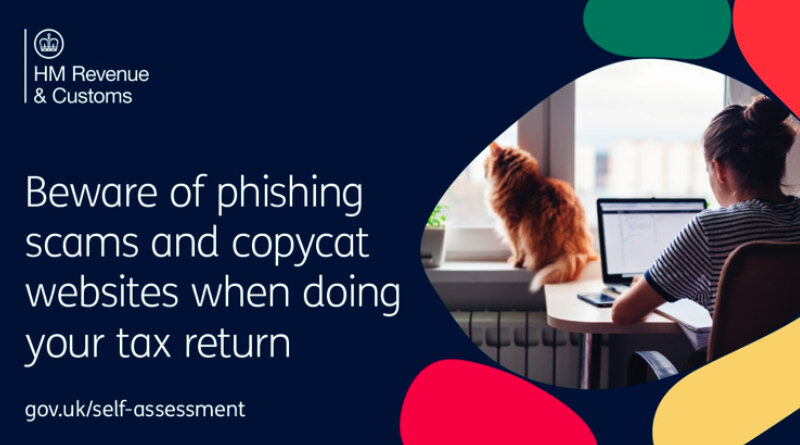 Self Assessment operators are being urged to be on guard against being targeted by fraudsters, warns HM Revenue and Customs (HMRC).

In the 12 months to August 2022, HMRC responded to more than 180,000 referrals of suspicious contact from the public, of which almost 81,000 were scams offering fake tax rebates.

Criminals claiming to be from HMRC have targeted individuals by email, text and phone with their communications ranging from offering bogus tax rebates to threatening arrest for tax evasion. Contacts like these should sound alarm bells – HMRC would never call threatening arrest.

Anyone contacted by someone claiming to be from HMRC in a way that arouses suspicion is advised to take their time and check the scams advice on GOV.UK.

Customers can report any suspicious activity to HMRC. They can forward suspicious texts claiming to be from HMRC to 60599 and emails to phishing@hmrc.gov.uk. Any tax scam phone calls can be reported to HMRC using the online form on GOV.UK.

Myrtle Lloyd, HMRC’s Director General for Customer Services, said:
“Never let yourself be rushed. If someone contacts you saying they’re from HMRC, wanting you to urgently transfer money or give personal information, be on your guard.

“HMRC will never ring up threatening arrest. Only criminals do that.

“Tax scams come in many forms. Some threaten immediate arrest for tax evasion, others offer a rebate. Contacts like these should set alarm bells ringing, so take your time and check ‘HMRC scams advice’ on GOV.UK.”

Fraudsters target customers when they know they are more likely to be in contact with HMRC, which is why Self Assessment customers should be extra vigilant to this activity. There is a risk they could be taken in by scam texts, emails or calls either offering a ‘refund’ or demanding unpaid tax, thinking that they are genuine HMRC communications referring to their Self Assessment return.

Some customers who have not done a Self Assessment return previously might be tricked into clicking on links in these emails or texts and revealing personal or financial information to criminals.

The deadline for filing paper tax returns for the 2021 to 2022 tax year is 31 October 2022, and 31 January 2023 for those filing their tax return online. Customers who file their return online via GOV.UK should not share their HMRC login details. Someone using the details could steal from the customer or make a fraudulent claim in their name.

HMRC is actively tackling the scams and fraudsters who attempt to mimic genuine HMRC activity and messages. The department’s dedicated Customer Protection Team works continuously to identify and close down scams.

HMRC also tackles misleading websites designed to make people pay for services that should be free or low cost, charging to connect people to free HMRC phone helplines. To protect the public, HMRC formally disputes and takes ownership of HMRC-branded internet domain or website names. Since 2017, the department has recovered more than 183 websites hosting low-value services such as call-connection sites, saving the public millions of pounds.