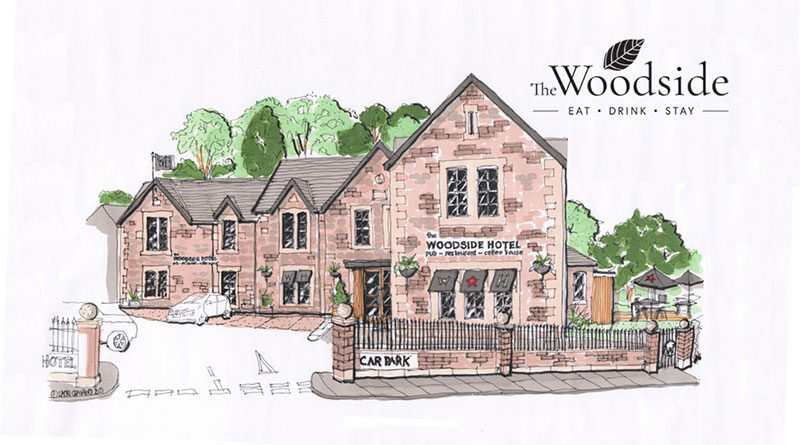 Stuart Riddle along with his wife Joanna have established a portfolio of pubs, restaurants, and hotels. Their latest venture is the £1,200,000 renovation of The Woodside in Doune due to open late July 2022.

Stuart, started his career working as a Commis Chef in the kitchens of AA Rosette awarded Hotels and had had a successful career with national pub/restaurant groups prior to starting his portfolio. He became head chef at the 2 AA Rosette Dunain Park Country House Hotel (aged 25) before going on to impress in various roles including, Menu Development Manager at the Spirit Group, Catering Controller at Bellhaven Pubs and finally as Head of Food Development (premium) at Greene King.

“My now wife and I had talked about having a restaurant when I was a young chef and she worked as a restaurant manager in the late 1990’s, but we didn’t feel it was realistic and wouldn’t have known where to start”.

In 2013, Stuart and Joanna started their first hospitality company and embarked on a £700,000 development of the Stirling Arms to create “The Riverside – pub, kitchen & coffee house”.

“After a successful career in the corporate world and surviving several redundancy scares and numerous restructures we felt we would like to be masters of our own destiny. We also felt that we could do it better than the nationals. At that point, I was 36, I handed back my company car keys and we created The Riverside” – Stuart Riddle

After the success of their Riverside venture, the pair invested £1,200,000 renovating The Allan Park Hotel in 2018. Located in Stirling, it was renamed “The Allan Park – pub, restaurant & coffee house w/ rooms” and transformed into a contemporary 120 cover venue with 8 letting rooms.

In November of 2021 they took ownership of their third property, The Woodside Hotel now known simply as “The Woodside”. The Woodside is located in the heart of the Forth Valley and is being heavily developed to offer a modern 140 cover venue. The opening of which is scheduled for late July 2022.

The Woodside will be accessible to residents and non-residents alike and will feature a pub, coffee house, restaurant, terrace dining, 11 letting rooms and a function suite. Renovation costs for the property are expected to reach £1,200,000.