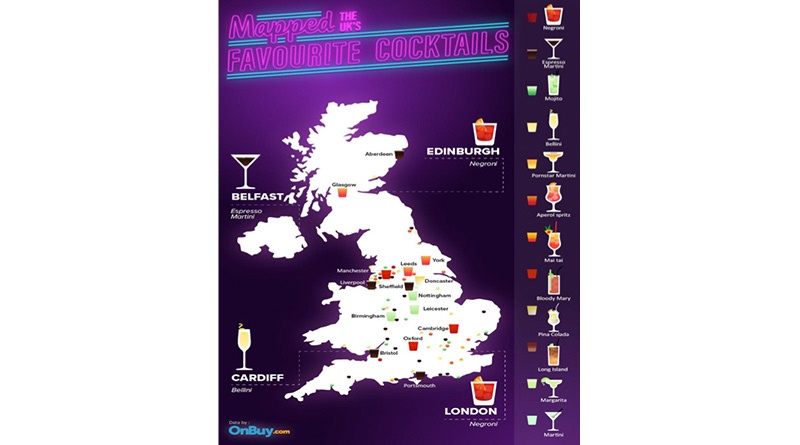 It’s no secret that Brits are fans of cocktails but with lockdown now being mandatory, bars all over the UK have had to close their doors. With the sun shining down and people taking to their gardens for picnics it’s no surprise that in the last month there have been 9,800 searches for cocktail recipes.

Eager to find out which cocktail is the UK’s favourite and most likely to be attempted during lockdown, online marketplace OnBuy.com took to Google adwords to discover the most searched cocktails.

OnBuy checked the search volumes of each popular cocktail in the UK over the last month to find the top 15 favourites.

Data reveals that a Mojito is the most searched cocktail amongst Brits with 43,000 monthly searches.

To get a better idea of each city’s favourite cocktail, OnBuy surveyed respondents from each UK city with populations of 100,000+ people. Respondents were given a choice of the 15 cocktails listed and were asked to pick their favourites. The results can be seen in the graphic above:

Espresso Martini was the most popular choice in the UK, 23 cities picked it as their favourite, including Bristol, Liverpool and Norwich.

Despite Mojitos being the most searched cocktail, it was placed as the second most popular in 15 of the cities surveyed such as Birmingham, Leicester and Nottingham claiming as their favourite.

Aperol Spritz, a summertime favourite, was the most popular cocktail in 14 UK cities such as Glasgow, Leeds and York. Only 4 cities picked a Bellini as their cocktail of choice, those cities being Cardiff, Dundee, Sunderland and Woking.

A classic Martini is the top choice of people living in Rotherham only, unlike a Negroni which is the favourite of 6 UK cities: Bath, Cambridge, Edinburgh, London, Manchester and Oxford.

If you like Pina Coladas and getting caught in the rain then you’re not alone; 13 cities picked this as their favourite cocktail, some of those cities being Reading, Southampton and Peterborough.