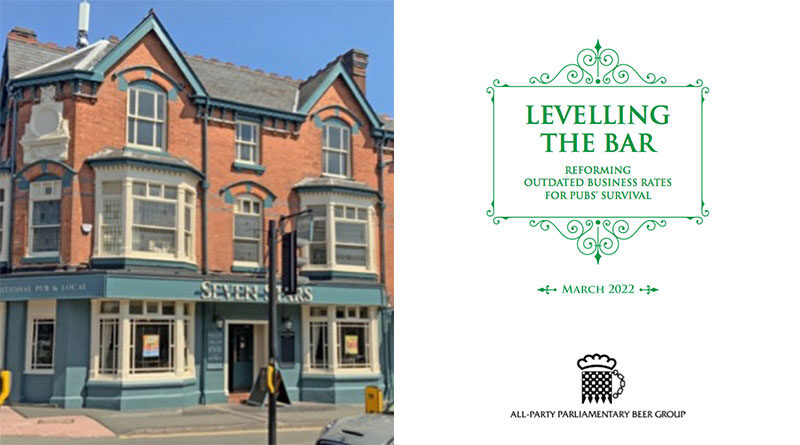 A new report, issued by the All-Party Parliamentary Beer Group (APPBG) of MPs, calls on the Government to urgently address the business rate iniquity which is threatening the future of pubs and their communities while online giants continue to swerve the taxman.

The report, Levelling the Bar: reforming outdated business rates for pubs’ survival, has been produced by the APPBG with evidence from a cross section of sector leaders.

The report notes:
• Pubs contribute 2.5 per cent of the total tax collected in business rates, but they generate less than half a per cent of rateable turnover – this equates to an overpayment of £570 million every year.
• Due to an ever-increasing ‘multiplier’ since the tax was introduced in 1990, business rates are now one of the biggest fixed overheads faced by pubs.
• The average pub pays 3% of its turnover in rates alone (some up to 10%), while the global giant, Amazon, only paid a total of 2 per cent tax on its 2020 turnover of almost £21bn.
• This outdated tax on bricks and mortar is threatening investment in high streets, skills, and communities – running counter to policy ambitions for levelling up.
• Pubs are being further hit by an opaque and esoteric system for determining their rates bills, which can place them at unfair disadvantage to competing retailers – such as restaurants and supermarkets – and penalise them for increasing their turnover.The APPBG also reports that the pandemic showed just how critical pubs are to communities across the country. Rates relief and other Covid support have been ‘lifesavers’ for community pubs – which in turn are supporting local recovery economically and socially – but many have been left reeling. One in ten publicans believe their business is unviable; and they’re now facing continued uncertainty as their customers feel the pinch economically. If support is withdrawn without a more equitable tax put in place, up to 20,000 UK pubs may be at risk. In response, the group of Parliamentarians is making a number of key recommendations to the Government, ahead of the Chancellor’s financial update later this month.
• Swift measures to introduce an online sales tax so that the burgeoning digital sector bears its fair share of the tax burden, with the funds raised used to reduce the costs borne by bricks and mortar high street businesses.
• A new and specific rates multiplier for pubs, closer to the 1990s level of 32p per pound of rateable value, to reflect the wider contribution that pubs make in sustaining and investing in their communities.
• Greater transparency and VOA resource to support the current system of valuation for pubs.
• As rising utility costs squeeze the life out of pubs, the government should help ensure their survival by increasing small business relief to include more community pubs to benefit.

“British pubs are at the heart of the community. Never more so, than since the pandemic – when their fundamental place in society has been pivotal.“The onus of business rates falls disproportionately on pubs in a valuation system mired by complexity and opacity, where online giants are not paying their fair share.“Urgent action is needed, and I call on the Chancellor is his Spring statement next week, to help us level the playing field and turn back the clock on years of stealth increases to business rates which threaten to bring a sector so critical to economic and social recovery to its knees.”

‘I’m sure many thousands of licensees across the country are joining me in urging the Government to act swiftly on this report’s findings. Too many of us have accepted our business rates as being a necessary evil, and a disproportionate fixed cost, for too long. It’s time for pubs to be recognised, not penalised, for our continuing physical presence in our communities.“As the pandemic has shown so clearly, not everyone prospers in a virtual world; we know our customers need us, and we need a fighting chance to deliver for them.”