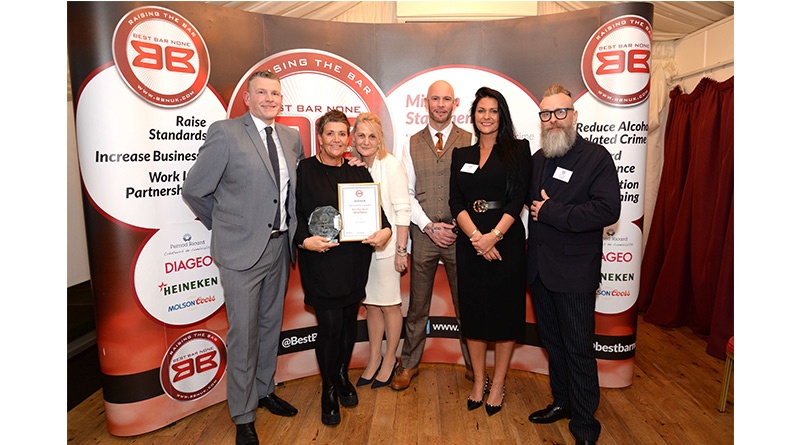 Sheffield’s Best Bar None (BBN) scheme has scooped the top prize in the national Best Bar None Awards, winning the title of ‘Best Overall Scheme’ in England and Wales, receiving the accolade at a prestigious ceremony held in the House of Lords on Tuesday 4th February 2020.

Backed by the Home Office, Best Bar None has been working collaboratively with the alcohol industry, local authorities and the police for over 16 years. It promotes responsible drinking and higher professional licensing standards in bars, pubs, hotels, clubs and entertainment venues in over 70 towns and cities across the UK.

Sheffield is one of the UK’s longest running and most successful Best Bar None schemes and over the last year the city has continued to be at the forefront of innovation and good practice. The team has worked hard to integrate BBN into Sheffield’s night-time economy and also to generate public awareness about the scheme.

Bolton now has 28 licensed premises accredited across its area. Since it was established in 2017, Bolton BBN has had real success in reducing crime in licensed premises, as well as reducing vulnerability across the borough.

Best Bar None was introduced to Cumbria a year ago. The scheme originally set out to accredit 12 venues in its first year, but by November it had already achieved 17 sites on board.

For the first time this year, assessors were asked to nominate an individual or a team from a Central Scheme approved venue, for outstanding performance during the assessment. The London Cocktail Club’s Goodge Street site was thoroughly deserving of the new Central Scheme Award, showing real commitment to Best Bar None standards.

The awards ceremony was hosted by Chairman of Best Bar None, Lord Smith of Hindhead, who said: “Best Bar None promotes strong and proactive relationships between licensees, the police and local authorities which are so important to the entire hospitality industry. I’m delighted to say that it has continued to go from strength to strength in the last year, with several new schemes popping up and a number of innovative new initiatives introduced by existing schemes.

“The Central Scheme is also growing at a pace, as operators located outside the areas in which a regional scheme operates become Best Bar None accredited. I am delighted to present the first Central Scheme Award to the London Cocktail Club in Goodge Street, which is a shining example of how the Central Scheme should be operating.

“The purpose of the national awards is to recognise and reward schemes for their commitment to Best Bar None and to highlight new ideas and best practice, in order to make towns and cities across the country safer and more desirable places to visit. Sheffield, Bolton and Cumbria are all thoroughly deserving of their awards and my congratulations go to all of those involved.”