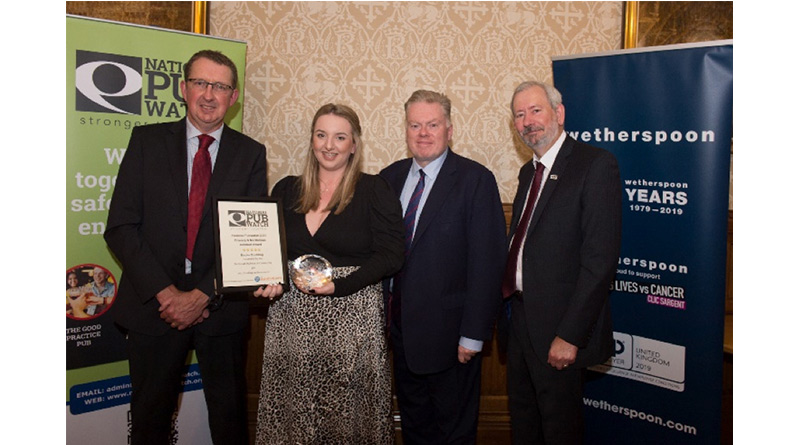 The ‘best of the best’ have been rewarded for their dedication and commitment to the licensed trade by National Pubwatch at an awards event at the House of Lords.

A raft of awards were given out at the glittering event, sponsored by pub chain JD Wetherspoon, including Bedsafe, the Bedford pubwatch, which was awarded the top accolade – the National Pubwatch Award 2021.

The awards night also saw Dan Davies, chairman of the Institute of Licensing (IoL), receive an Award of Merit. There were also two Bravery and Meritorious Conduct Awards given to door supervisor of Shooshh in Brighton, Clive Read and general manager of The Winery in Burton, Becky Goulding.

The National Pubwatch Award 2021, which is judged by members of the National Pubwatch Committee, commended the social responsibility of the Bedsafe scheme, whose members work closely with the local police and council to target and reduce alcohol-related disorder in the town.

In particular, the judges highlighted the support given by the scheme to those working in the wider night-time economy, who have suffered assault and harassment from people who are identified as having been drinking in town centre venues.

Mark Judd, chairman of the Bedsafe Pubwatch, said the scheme had been well supported and very positively received by the community. He said its success was down to the fact that everyone had bought into the scheme and strong partnership working.

On receiving the National Pubwatch Award 2021 he added: “It reinforces that what we have been doing is the right thing. I think it will make people realise that we are leading the way, showing people how it can be done and how pubwatch can positively protect the community.”

At the event Dan Davies, who is also director of pub chain Rockpoint Leisure, was presented with the National Pubwatch Award of Merit, which acknowledges the valuable contributions that individuals have made to the success of pubwatch schemes around the country.

Throughout his time as chairman of the IoL, Dan has been a vocal and active supporter of partnership working and he is a strong advocate of the benefits of pubwatch.

Dan said: “I am honoured. I have been in this industry since I was 16 starting out as a glass collector. I was a licensee at 18 under the old system, and then I started CPL, which ended up as the biggest training IT supplier, which I ran for 30 years.

“I am passionate about this industry.”

Two individuals were given Bravery and Meritorious Conduct Awards by National Pubwatch, which recognises those whose actions have either saved life or minimised physical harm in the night-time economy.

Door supervisor Clive Read, who works at the Shooshh club in Brighton, was recognised for detaining a rapist and rescuing a young girl on Brighton Beach.

“We are protecting the public even outside our venue because we feel that it’s important that customers are able to leave a nightclub and continue their journey or get home in safety,” he said.

“To be honest I was just doing my job.”

Becky Goulding, who is general manager of The Winery Bar Restaurant in Burton, ran to help a customer who had collapsed from cardiac arrest in the car park.

Becky immediately started CPR and called for another member of staff to ring for an ambulance and saved his life.

When she heard she was receiving the award at a dinner at the House of Lords she said it came as a bit of a shock.

“To have saved a man’s life is just out of this world and to then be recognised for it as well. It is incredible,” she said.

National Pubwatch chairman Steve Baker OBE said: “It has been a privilege after such a difficult couple of years to be able to recognise those in the licensed trade for all their good work and commitment.

“Recognising individuals and groups that have gone ‘above and beyond’ to help ensure a safe licensed trade is even more crucial this year as the industry faces its greatest challenge coming out of the Covid-19 pandemic.”