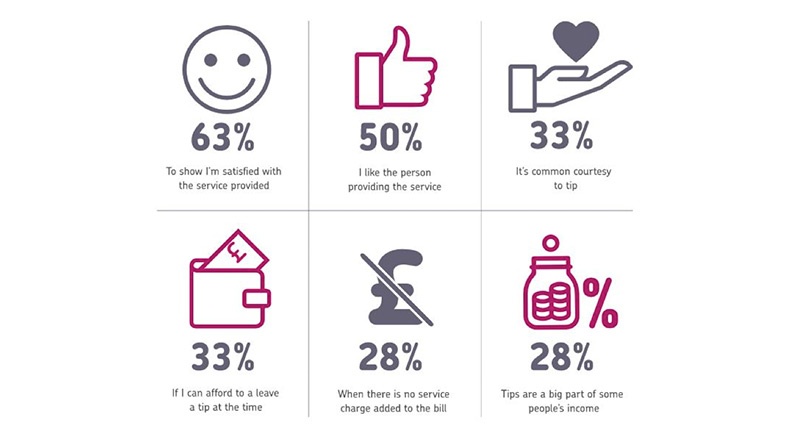 The British are known for being less than complimentary tippers, but with COVID-19 forcing many small businesses to close, it begs the question of whether the UK is now becoming more generous in an effort to save local businesses.

The 2021 Tipping Index commissioned by takepayments Limited, surveyed over 2,000 consumers [1] to compare their tipping attitudes from before the pandemic and now.

As businesses have had to introduce new COVID safety measures, some are opting to charge their customers for the extra expense as three in ten (31%) Brits state they have already encountered a COVID charge.

Before the pandemic, Brits preferred to tip in cash (91%) as one quarter of respondents said they would bring cash especially to leave a tip and one quarter would only tip if they had spare change on them.

However, as more places have gone cashless nearly three in ten (27%) say tipping isn’t always possible due to places no longer accepting cash and one fifth (18%) of Brits no longer carry cash on them which they would usually leave as a tip.

Brits prefer to leave a tip in cash as they feel more confident the cash goes to the person serving them (64%) resulting in over a third stating they would never tip by card for this reason (35%).

Sandra Rowley at takepayments Limited said: “The professions which usually receive tips are some of the industry’s hardest hit by the pandemic and now they could face even more hardship as more businesses introduce the COVID charge. It’s clear from our research the new charge is having a knock-on effect on whether a customer tips and how much they tip.

The cashless movement is also a concern for those that do rely on tips as there is a lot a misconception around card payments and tipping. Businesses are able to separate tips from the cost of services when taking card payments and this needs to be more commonly known and promoted in businesses to encourage customers to continue tipping.”

The full findings of the takepayments 2021 Tipping Point Report is available to view here.