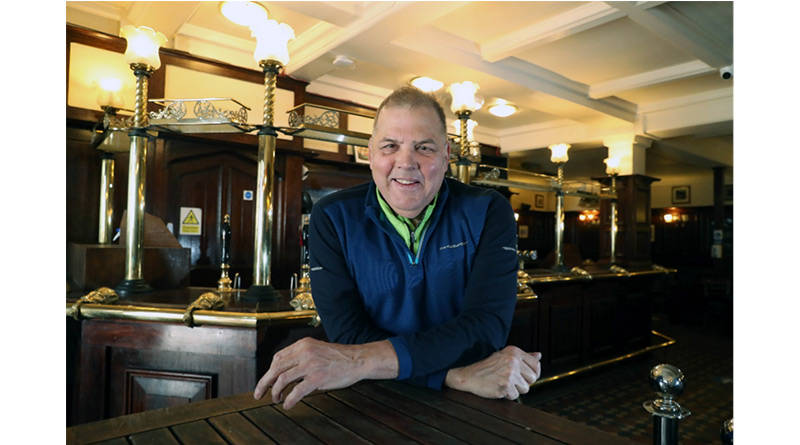 The team behind the successful refurbishment and reopening of The Philharmonic in Cardiff has turned its hands to doing the same to one of city’s oldest pubs, the Goat Major.

Croeso Pubs Ltd, which also runs Brewhouse and Retro as well as The Philharmonic in the city centre, has taken over the lease of the Goat Major from Brains and is restoring it to its former name, Blue Bell.

Despite one of the most challenging periods in recent history for hospitality, Croeso Pubs has taken on another venue, and refurbished and re-decorated it throughout the last lockdown. Blue Bell officially opened its doors on June 1st, welcoming drinkers with its own Blue Bell ale, and diners with a traditional pub menu.

The Blue Bell originally opened in 1813 on High Street opposite Cardiff Castle, but its name was changed in 1995 when Brains renamed it the Goat Major after the goat mascot of the Royal Regiment of Wales.

Simon Little, Director of Croeso Pubs, said: “As a Cardiff born small pubco, we are very proud to be taking over another one of Cardiff’s most iconic and oldest venues with the reopening of Blue Bell.

“The Philarmonic has been a roaring success and so when we saw a venue like the Goat Major was closed with no sign of reopening, we jumped at the chance of taking it over. We knew from day one that we would bring back the old name of Blue Bell.”

Nick Newman will be managing Blue Bell. He has run pubs and clubs around Cardiff for forty years and is the Chair of the Cardiff Licensees’ Forum. Nick said of the new venue: “We realise that the Goat Major was an important venue for our veterans, and we want to reassure them that the Blue Bell will remain so – it will still be the place for our armed forces and veterans alike to feel welcome and at home.

“But we felt that it was time to restore it to its former glory as Blue Bell – a venue that many will remember, and which was synonymous to Cardiff for so many years.”

Nick said he knew that making the call to rename it Blue Bell was the right one when he worked with local signwriter Alan of Real Signs on the billboards for the venue, as he was the same signwriter that Nick worked with on his first venue when he first started in the pub business.

While Blue Bell was undergoing its facelift, the construction team also uncovered some Victorian tiles which they have preserved, as well as retaining the bar which was originally at the Goat Major: “We had planned to start from scratch when taking over the pub, but the bar is so beautiful and such a classic piece of pub furniture that we decided to give it a spruce up. Just liked we did when refurbishing The Philly, we want to keep as much of the heritage of the pub as we can and so have preserved what we have found. The bar fits perfectly into the look and feel of the new Blue Bell, so it is great that we have been able to retain it,” said Simon.

The Croeso Pubs team hope Blue Bell will become a firm favourite for those visiting the city, as Nick explained: “Being so close to Cardiff Castle, we know that the pub is very popular with tourists and locals alike, so the menu will be great Welsh traditional classic such as fish and chips and Welsh rarebit.

“We are very much looking forward to welcoming regulars and new customers through the doors of Blue Bell. It is a great venue and one that I will be very proud to manage. Like me, it’s an old Cardiff classic.”