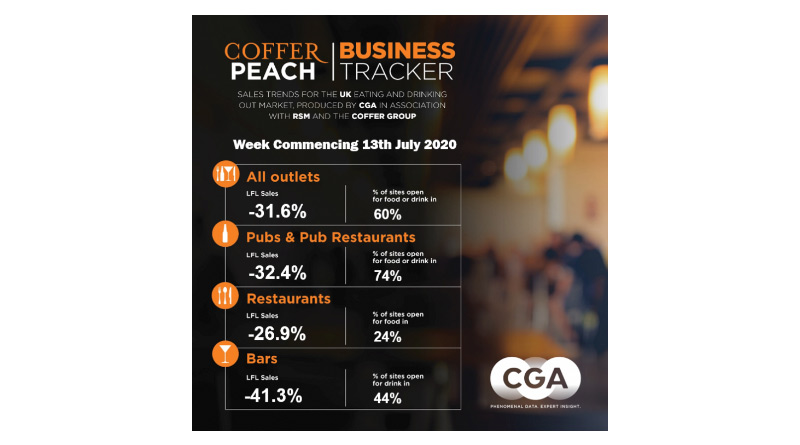 Sales of food and drink in pubs, bar and restaurant have reported improving sales in the second week after shut-down was lifted as more sites also reopened, according to latest Coffer Peach Business Tracker data.

Levels remain well below pre-COVID norms, with figures for the week beginning July 13 showing collective like-for-like sales in sites trading 31.6% down on the same week last year. But that was a better performance than the minus 39.8% level recorded in the first week back.

Overall, total sales across the managed pub, bar and restaurant market were up 40.6% on week one trading.

A total of 60% of group-operated sites were open for eating and drinking inside, up from the 55% trading during the first week after restrictions were lifted.

Restaurants saw the biggest shift, with like-for-likes down 26.9%, compared to 40.0% down in the first week. Restaurant groups have generally taken a more cautious approach to reopening, still with only 24% of sites open for business, compared to 17% in week one.

Pub groups have generally been more ambitious in their reopening strategies, with 74% of sites open in week two compared to 70% the week before. Pubs that were open over the week saw sales down 32.4% on the same week in 2019, compared to 39.3% down the week before.

Trading at approaching 70% of pre-COVID norms after just two weeks should be seen as a solid performance, in the light of consumers stated caution about going out to eat and drink again after lockdown. The steady improvement on the first week back is also encouraging, and operators will hope to maintain that momentum as more sites open their doors. Providing the public with reassurance that it’s safe to go out and that they will also have a good time is going to be crucial,” said Karl Chessell, director of CGA, the business insight consultancy that produces the Tracker, in partnership with The Coffer Group and RSM.