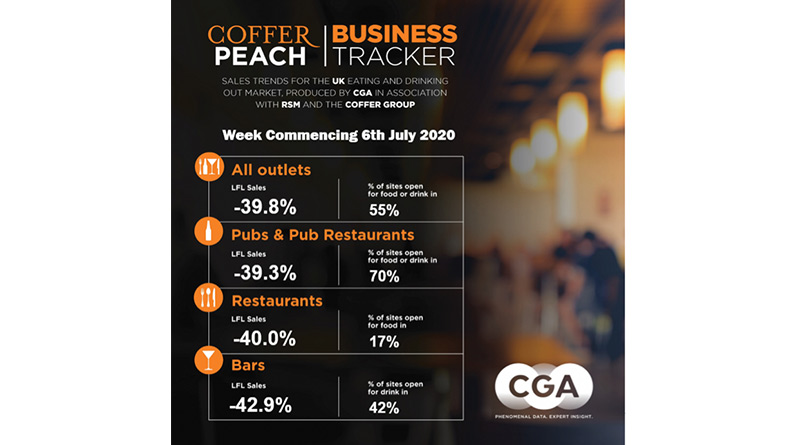 Managed pub, bar and restaurant groups that had sites open in England in the first week after shut-down was lifted have reported collective like-for-like sales 39.8% down on the same week last year, according to latest Coffer Peach Business Tracker data.

Tracker figures for the week starting July 6 show that 55% of group-operated sites had reopened for eating and drinking inside, up from the 36% trading on the first weekend restrictions were lifted. Full-week sales were also better than over the first Saturday and Sunday, when like-for-likes were 44.5% below pre-COVID norms.

However, many more pubs opened their doors than restaurants and bars. The industry barometer shows that 70% of managed pubs and pub restaurants traded, while just 17% of restaurants and 42% of bars were open for business.

“Trading at almost 60% of pre-COVID norms is actually a better performance than many other markets internationally, such as the US, experienced on reopening. The sector still has a long way to go, but this sets the benchmark against which the speed of recovery will be judged,” said Karl Chessell, director of CGA, the business insight consultancy that produces the Tracker, in partnership with The Coffer Group and RSM.

CGA will be reporting trading progress via the Tracker on a weekly basis as the market begins to recover and more sites reopen, including measuring week-on-week increases.

“Operators told us that most would be taking a phased approach to reopening and we have seen this in the figures. The 70% of managed pubs in the first full week compares to just 42% over the first weekend, and although restaurants have been taking an even more cautious approach we know more will be open next week,” Chessell added.

In all, 44 companies provided data to the Tracker, with another 11 operators reporting that they had yet to open any sites.