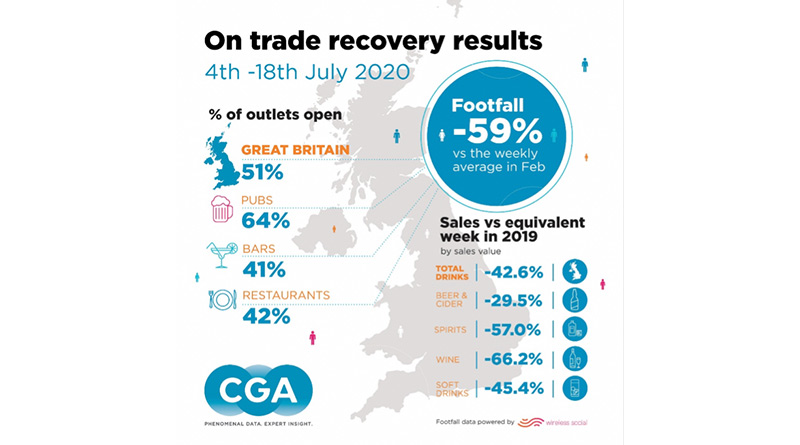 Half of the on-trade is now open and trading, with pubs so far faring better than restaurants across reopening, footfall and sales metrics.

Those are among the top insights from CGA’s suite of research sources after two full weeks of post-lockdown operations in England and the first few days of reopenings in Scotland and Wales. CGA’s Outlet Index data to last Saturday (18 July) indicates that 51% of all licensed premises in Britain had reopened, with numbers higher in the managed (60%) and leased and tenanted sectors (62%) than the free (45%) segment.

So far, pubs have spearheaded the relaunch of the on-trade: nearly two thirds (64%) of those that closed in March are now open again, compared to around two in five restaurants (42%) and bars (41%). The pace of openings has been slightly slower in London, where just under half (48%) of sites are trading.

Reopenings have helped to encourage more visits to town and city centres. Wireless Social’s sample of more than 1,000 locations shows that weekly footfall to Saturday (18 July) was 59% of the weekly average in February, the last full month before lockdown. That is four percentage points better than the previous seven days, and the highest point since mid-March, when the lockdown came into full effect.

Footfall has increased across all dayparts, and has recovered faster than average in evening periods. However, large city centres are still lagging behind the countrywide average, indicating the lingering reluctance of consumers to visit very crowded spaces and take public transport—and clearly the figures are well below levels that might be expected at this time of year.

Increased visits have translated into increased sales. CGA’s Drinks Recovery Tracker data for the week to last Saturday (18 July) shows that weekly sales by value were 42.6% down on the same week in 2019, though this represents an improvement of three percentage points on the 45.5% drop the previous week.

Beer and cider (down 29.5%) has performed significantly better than spirits (down 57.0%) and wine (down 66.2%), and its popularity means that pubs are recovering their drinks sales faster than restaurants and bars. Sunday was the strongest day of the week, and Wednesday, Thursday and Friday drinks sales were all up week-on-week.