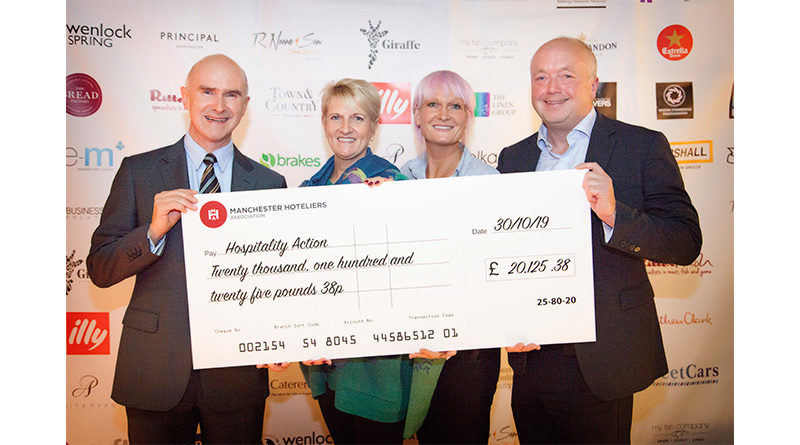 A record total of more than £40,000 was raised for various charities, following this year’s Manchester Hoteliers’ Association Awards and Ball.

The funds were handed over at the Whitworth Locke Hotel to Mustard Tree, Manchester Mind, Wood Street Mission and Hospitality Action.

Hospitality Action were credited with 50% of the donations – a total of £20,125. The rest was divided between the three remaining charities – each receiving a total of £6,708.

Speaking after the event, Adrian Ellis, Chair of MHA said: “We are thrilled to announce that the MHA Ball has succeeded in raising another record amount of money for our charity partners.

“It was another memorable evening that celebrated the region’s thriving and vibrant hospitality industry and rewarded the hard-working and talented individuals from a range of hotels across the city.

“It gives me great pleasure to distribute the funds to four very worthy causes, including Hospitality Action who received half of the money for the incredible work they do in the sector, with the other half divided equally between the three remaining charities.

“Every year, we seem to raise the bar and we have no doubt that we will do the same next year.

“This wouldn’t be possible without the amazing support of our sponsors and partners, so I’d like to express my gratitude and thank everybody who was involved in making it another night to remember.”

Each year, the charities are hand selected by a panel, after much deliberation and masses of applications.

Adrian added: “It was an honour to come together one month on from the event to distribute the money raised and show our appreciation for the amazing support that we receive year on year.”