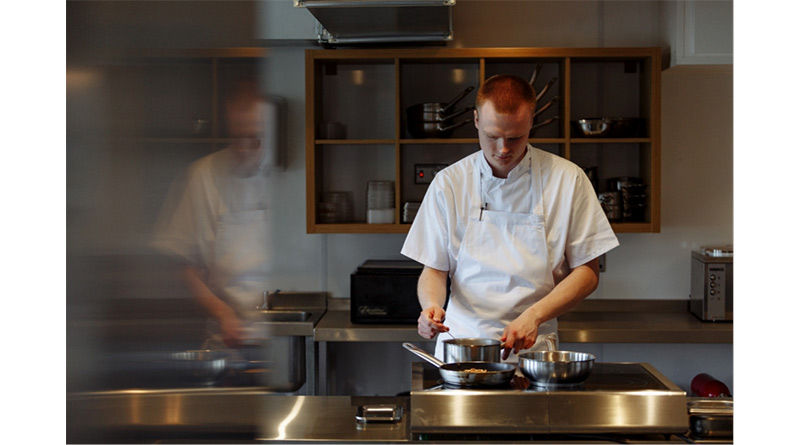 Diners at a Northumberland restaurant can now boast that they’ve been enjoying a meal at one of England’s best.

Restaurant Hjem, in Wall, was given a bronze-plated seal of approval at the VisitEngland Awards for Excellence 2020, which took place as an online event last night. (Aug 17).

At the end of July, the fine dining restaurant was named as a finalist in the national awards, which recognise excellence across England’s tourism industry.

Combining the best local produce with Scandinavian values and cooking techniques, Hjem has attracted food lovers from all over the North East and far beyond since its May 2019 opening thanks to its exquisite tasting menu and unique atmosphere.

Restaurant manager, Ally Thompson, who runs the restaurant and adjoining pub, The Hadrian with her partner and Hjem head chef Alex Nietosvuori, ‘attended’ the ceremony from Hjem’s distinctive open plan kitchen thanks to the wonder of digital technology.

Alex, and her sister Liza clinked their wine glasses as the results were announced and will now have to find a space in their foyer for Hjem’s latest accolade.

Ally said: “We were delighted to have been shortlisted in these national awards alongside established and Michelin-starred restaurants, and we’re honoured to have been given the Bronze award.

“The lockdown meant we weren’t able to celebrate our one-year anniversary in May, so I think we might be using this as a great excuse to have a bit of a belated party with everyone who has helped us realise our dream.”

Entries in both The Good Food Guide 2020 and The Michelin Guide 2020 and crowd of rave reviews – including one from The Sunday Times’ Marina O’Loughlin – are among the achievements the couple have notched up since welcoming Hjem’s first diners.

Ally added: “We always wanted Hjem to be a destination restaurant, offering a food experience people were willing to travel for, and ensuring we showcase the very best of Northumberland produce is a big part of that.

“We’re really thrilled to be given this recognition by the VisitEngland judges and look forward to welcoming more and more visitors from all over the UK and beyond.