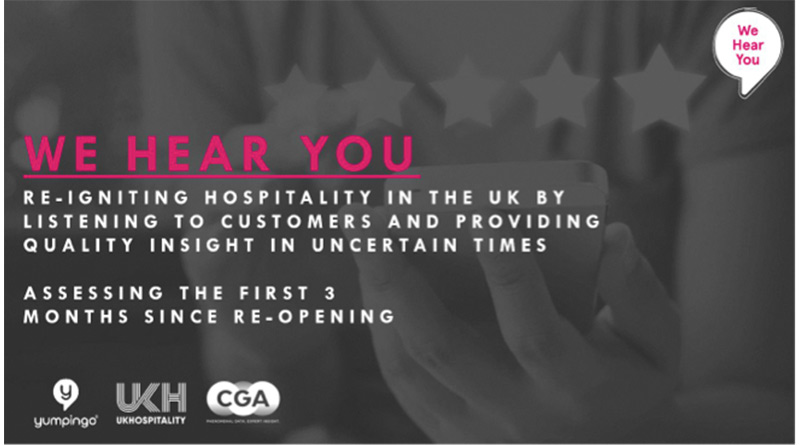 The vast majority of consumers have been satisfied with pub, bar and restaurant operators’ safety precautions and communications in the three months since lockdown was lifted, the industry-wide ‘We Hear You’ initiative has shown.

The campaign, steered by CGA, Yumpingo and UKHospitality, has collected views from more than 200,000 consumers after visits to nearly 1,200 different venues since early July, and has played an important role in the sector’s efforts to listen to guests’ needs and concerns.

There is widespread acceptance that precautions have either not affected guests’ experiences (60%), or that it is necessary that they do so (34%). The number of people thinking their overall experience was better than before lockdown (15%) is nearly as many as those who thought it was worse (16%).

Venues have been under huge pressure to deliver and communicate safety precautions, and these figures show that consumers are appreciative of the hard work that teams have put in,” says Charlie Mitchell, CGA’s research and insight director. “With confidence so fragile and more strict restrictions on trading emerging, all businesses will have to double down on efforts to reassure guests that they are safe and well-supervised places to visit.”

However, while satisfaction with hygiene remains high, it fell a little in September—from 77% in the first week to 71% in the last. Net Promoter Scores have stabilised at around 50% in September, after a dip in August.

The survey also highlights ongoing concerns around crowding and the social distancing of other guests. Anxiety levels have increased slightly over September, in line with fears of a second wave of infections and increasingly tough restrictions. Safety remains a top priority, with four in five (79%) considering precautionary measures before making visits—a number that has stayed consistent ever since the reopening of hospitality.

Gary Goodman, CEO and Founder of Yumpingo, says: It is encouraging to see that the consumer confidence in the hospitality industry as a whole remains so high after three months. It really goes to show that the industry is working relentlessly and consistently to keep both consumers and staff safe, while providing a positive and memorable guest experience.”