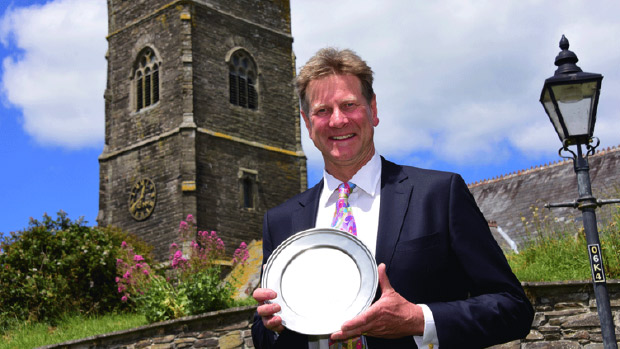 James Staughton Chief Executive of St Austell Brewery has been awarded the prestigious Trelawny Plate at a special Service of Thanksgiving and Commemoration on July 2nd at Pelynt Church, near Looe.

The Trelawny Plate Award is presented every two years to the person judged by a senior and representative panel ‘to have contributed most to the spirit of Cornwall’. The plate originally belonged to Bishop Trelawny and has been donated by the Bishop’s descendant Sir John Trelawny.

The award comes as Staughton prepares to retire in January, after 40 years at St Austell Brewery. During his time at the helm of one of Cornwall’s most famous family businesses, the company has grown dramatically. This year the company reached the milestone of selling 150,000 brewers’ barrels of its own brand beers in a calendar year – the first time in its 168-year history. In 2018 the Brewery was awarded a Queen’s Award for Enterprise for Sustainable Development.

As a great-great grandson of company founder Walter Hicks, James joined the Brewery in 1980 and was appointed to the Board in 1988. He was Wines and Spirits Director from 1990 to 2000 and became Managing Director in 2000. The company now employs over 1,500 people, runs over 170 pubs and sells its beers across the globe.

Staughton’s contribution to Cornwall goes beyond the Brewery gates. He has served as a non-executive Director of the Cornwall Development Company, Chairman of the Independent Family Brewers of Britain and a Trustee of the National Maritime Museum at Falmouth. He is a Deputy Lieutenant for Cornwall and is Chairman of both the St Austell Bay Economic Forum and the Cornwall Place Board.

Following the ceremony, James Staughton said: “I am honored to have received the Trelawny Plate today. Cornwall is a wonderful and very special county. I will continue to play my part in supporting its growth, and future well-being with great pride, for years to come.”
Bishop Trelawny, who was ordained in 1673, was one of seven bishops charged with high treason and imprisoned in the Tower of London for refusing to implement King James II’s Declaration of Indulgence granting religious tolerance to Catholics. He died in 1721 and was interred in the family vault at Pelynt Church.

The original Trelawny Plate, owned by Bishop Trelawny, is currently on display in the Royal Cornwall Museum in Truro. A pewter replica, donated by Sir John Trelawny, is presented to the recipient of the Trelawny Plate Award every two years.

Trelawny, otherwise known as ‘The Song of the Western Men’, is a popular Cornish patriotic song and has become the county’s unofficial national anthem. In 2011, one of our beers was named ‘Trelawny’ in honour of the Bishop.

When news of the award was first announced, Sir John Trelawny, the 14th baronet and direct descendant of the Bishop, said: “James Staughton is a very astute businessman, a family man and a Cornishman through and through, who has spent many years championing the culture and community of Cornwall. James is the perfect choice to receive the Trelawny Plate.”