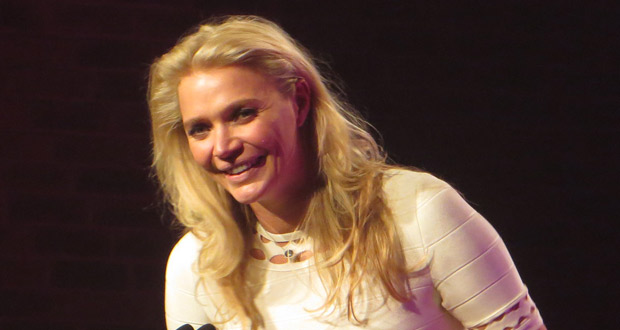 The All-Party Parliamentary Beer Group has named Jodie Kidd, the licensee of the Half Moon in Kirdford, Sussex as its “Beer Drinker of the Year” for 2019.  Jodie stared as a model when she was 15 and developed an amazingly diverse career as a racing driver, TV presenter, Strictly Come Dancing competitor, Celebrity Master Chef Finalist and pub landlady.

Mike Wood, Chairman of the All-Party Parliamentary Beer Group and MP for Dudley South said “Jodie has been a tireless campaigner for UK beer and pubs.  Last October she led a delegation of brewers and fellow publicans to deliver a petition with over 100,000 signatures to 10 Downing Street that had been collected as part of the “Long Live the Local Campaign”.  This called for action in the budget of the eye wateringly high level of tax paid by UK beer and pubs. UK beer drinkers were enormously grateful that the Chancellor heeded their call”

“Jodie is vivid proof that beer and pub lovers are not all old, male and stale!”

The Beer Group also presented its other awards at the dinner: