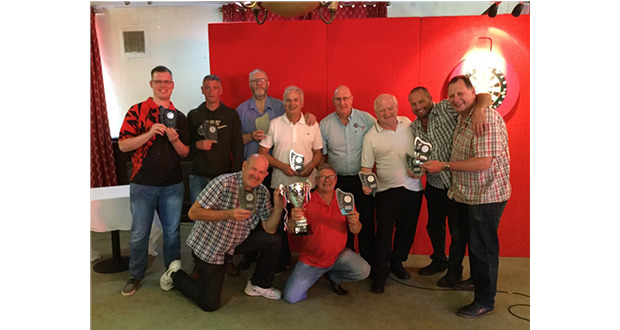 A popular pub in Kidsgrove, Stoke on Trent has won an annual darts competition held by leading community pub operator, Admiral Taverns after a knock-out performance by the Canal Tavern.

After a nail-biting final against the Kings Head in Newport, the triumphant team reached the finishing line beating their rivals 6 games to 4. The team were delighted to be awarded £1,000 to split amongst the players as well as the opportunity to host an exhibition night with the former World No. 1 BDO darts player, Steve Beaton at the Canal Tavern on Saturday the 2nd November.

Licensee Beverley Franklin has hosted the local darts team at her pub for nine years, and she was ecstatic to hear the news as she reaches her tenth year behind the bar at the Canal Tavern:

“It’s wonderful that the team’s efforts have finally paid off after working so hard for so many years! I’m incredibly passionate about our sports teams at the pub and they’re a real asset to the wider community. It’s great to have the support from them too both as local, regular customers and as long-time friends. Bring on the exhibition night!”

The Canal Tavern is a popular local for families, well-known for its sport offer and its enviable location looking out onto the Caldon Canal.

For the upcoming exhibition night, Beverley will invite locals to watch a thrilling exhibition match between team captain Pete Hardy and Steve Beaton and will provide a selection of nibbles on the night. Those keen to have a chance to play with the former World No. 1 will be able to take part by providing a donation to local charity Midlands Air Ambulance.

“I’m absolutely thrilled for Beverley and the darts team! The pub is renowned with its sports fanatics as a go-to local and has an incredible evening lined up for those eager to see live action from a professional! A huge congratulations to Beverley and Eddie, and the Canal darts team!”