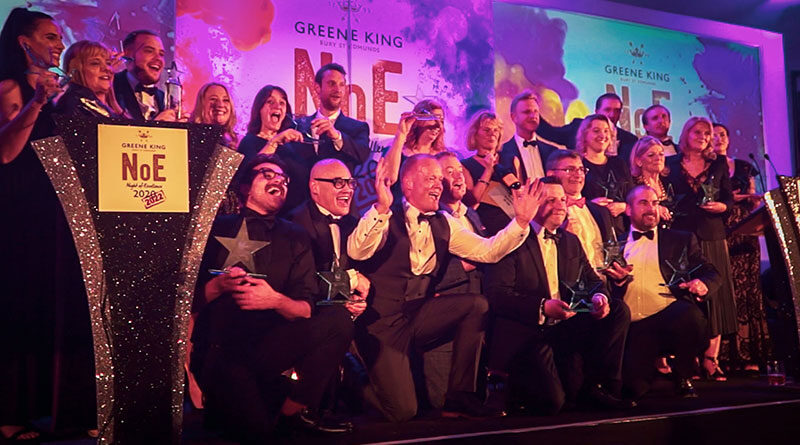 Ten pubs and two licensees have taken home honours at the Night of Excellence awards in a lavish ceremony and dinner held at Whittlebury Hall in Towcester, Northamptonshire.

Comprising of 14 awards ranging from Community Pub of the Year to Pub Team of the Year – and an overall Pub of the Year award – entrants to the Night of Excellence awards go through a strict judging process including mystery visits in order to be crowned winners. Over 200 pubs and licensees entered the awards, eventually being whittled down to 30 finalists.

Mari Woods, licensee for the Rose of Moseley pub in Moseley, Liverpool won the lifetime achievement award in recognition of her 30 years operating the pub and raising in excess of £250,000 for charities.

Clive Price, founder of Baron Pub Co Ltd, won the Multiple Operator of the Year award in recognition of his consistent and proven track record in turning around pubs into thriving locals at the heart of their communities.

Wayne Shurvinton, Managing Director for Greene King Pub Partners, said:
“Congratulations to all the winners at the Night of Excellence awards. And a big well done to the team at The Barologist in Edinburgh for winning Pub of the Year!

“Our partners are a class above, so choosing the winners was no easy task and the bar was exceptionally high.

“It is great to celebrate our business partners and the way they go above and beyond to run fantastic pubs for their local communities. I look forward to making the Night of Excellence awards an annual event going forward!”

Andrena Smith-Bowes and Jamie Mackinnon of The Barologist, said:
“Words cannot express how delighted I am to have won not one but THREE awards at the Night of Excellence awards, including Pub of the Year!

“When we opened The Barologist in 2018 I wanted to create a brilliant and unique pub experience – winning these three awards shows we have done just that.

“I would like to dedicate all three of the awards we have won to the brilliant team at The Barologist – this award is a thanks to you and the amazing work you do.”