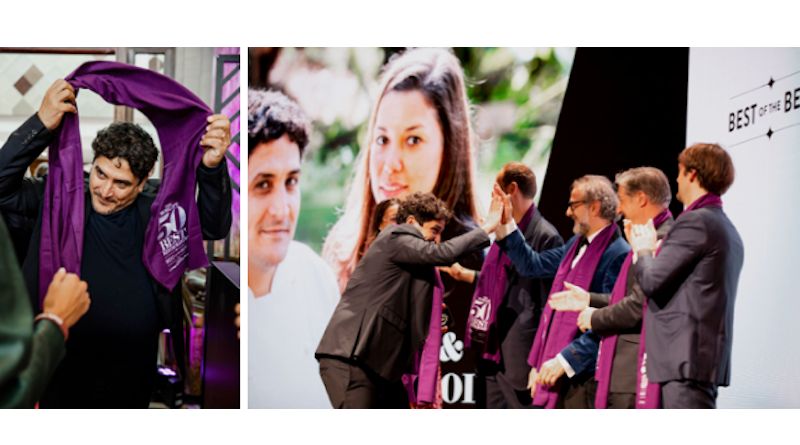 During the annual ceremony of the prestigious The World’s 50 Best Restaurants 2021 – which took place on Tuesday, October 5th in Antwerp, Belgium – Mirazur restaurant was honoured with the “Best of the Best” Award. Chef Mauro Colagreco accepted the accolade on behalf of the restaurant, joining the ranks of former No.1 winners on stage.

In June 2019, The World’s 50 Best Restaurants inaugurated the “Best of the Best” category, honouring those restaurants voted as No.1 and recognising them as “iconic dining destinations”. This means that having achieved the ultimate position, winners will no longer feature within the active list, but join other former No.1 restaurants in a separate, dedicated category.

Mauro Colagreco and Mirazur entered The World’s 50 Best Restaurants list for the first time in 2009. Since then, the restaurant has moved steadily up the rankings, featuring in fourth place in 2017, then third place in 2018, before being awarded the number one spot in 2019. This achievement meant that it was the first time since the creation of the ranking in 2002 that a French restaurant had taken the top-ranking spot and in doing so, Mauro made awards history.

For Mauro, joining this esteemed group represents great pride: “I am proud to be part of The 50 Best Restaurants Hall of Fame representatives. And to be part of a new style of French kitchen, one that lives to the rhythms of nature and the influences of the world. This recognition also offers visibility that allows us to raise our commitments higher and reflect on the challenges of our sector today and in the future. As a chef and restaurateur, we owe it to ourselves to lead by example and to show that change can be driven through food.”

Such an honour is a reward for the many years of care and support Mauro has demonstrated to Mirazur and the region of Menton, as well as the producers and suppliers he works with. As a chef always driving forward, Mauro continues to be inspired by his surroundings and will open two new restaurants this season within The Maybourne Riviera hotel – Riviera Restaurant, which opened on September 22nd and Restaurant Ceto, which will open its doors on Saturday, October 9th. Within this large-scale project, Mauro sees another opportunity to bring his culinary vision to the fore, leaning on his surroundings and harnessing the very best in local ingredients and produce, putting the region at the forefront of the international dining scene.