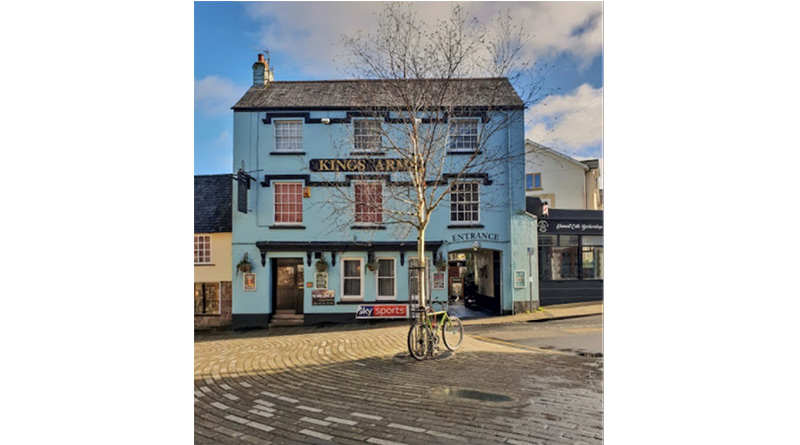 Tenant, Rob Bass, of the Kings Arms Okehampton has rewritten his hit anthem for this year’s EUROS. The 2018 World Cup song, “When the Lions Roar!”, has been given a timely update with a new intro and final verse, to support England’s inspiring EURO 2020 campaign.

Credited to The Kings Arms Collective (KAC), the lyrics were written by Rob himself, and then produced by Richard Brown, previously a professional music producer who has worked with top artists. The chorus is provided by a group of regulars, making the song a real team effort. The homegrown anthem has even been given the seal of approval by the official England Band, who have said it is the best football song they have heard for 25 years.

Rob said “I first wanted to make an England football song in 1990 and it’s been a dream of mine ever since. I wanted to make a song that was easy to learn and fun to sing, that everyone could sing along to. Fast-forward to the 2018 World Cup and I finally managed to convince my locals to help me out. We have lots of live music at the pub so it wasn’t difficult to find talented musicians but it was a manic turn-around, I pitched the idea to Richard on the Tuesday and we recorded it on the Saturday, when I heard it on BBC Radio Devon that was the first time I had heard the song in its entirety.

“This year, for EURO 2020, we wanted to update it to give it the longevity it deserves, it’s a catchy earworm and Richard’s producing skills really shine through on it. This song massively embodies that community spirit and comradery that pubs have missed being face to face with over the past 16 months. It just goes to show the amazing and creative things you can do when you get your locals involved. They were so enthusiastic to help us with the video and we got it recorded in one day. Last time we released the song, our local community’s support was overwhelming – all of us involved felt like local celebrities! To get the backing this year of the official England Band is simply incredible, it means a great deal that they love it and have shared it on their social media.”

“When the Lions Roar!” is available to stream on Amazon Music, Apple Music and Spotify, and you can watch the full video on YouTube here: https://www.youtube.com/watch?v=NaN5kax7PGg