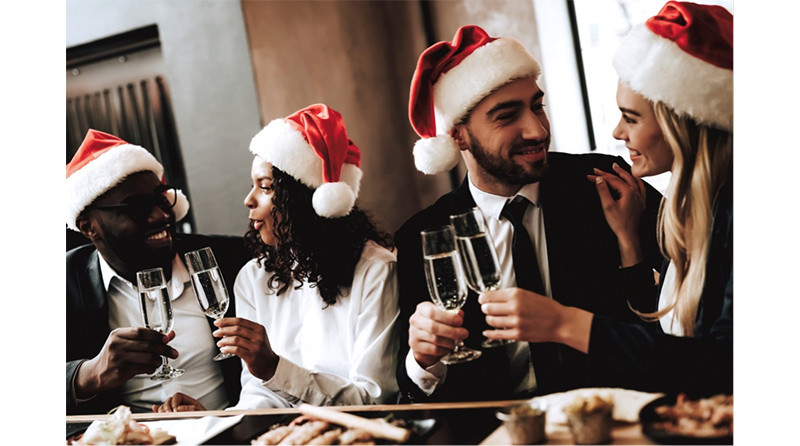 New research from alcohol education charity Drinkaware reveals that almost two-thirds (61%) of drinkers in the UK over-indulge on alcohol over the festive season more than they usually do, while one in five (18%) say they typically experience more hangovers during this period.

The YouGov poll for Drinkaware also found that drinkers who work are more likely to feel pressured to drink at their work party (33%) than other times of year such as New Year’s Eve (where 29% say they feel more pressure to drink) and Christmas Day (20%). And more than a quarter (29%) feel extra pressure to drink over the festive period with their work colleagues.

Drinkaware CEO Elaine Hindal says: “This new research shows just how much drinking is ingrained within the UK’s work culture during the festive period, with many people feeling more pressure to drink.

“Over-indulging can lead to mistakes, regrets and hangovers – as well as increasing the risk of developing a range of diseases if consumption regularly exceeds the Chief Medical Officers’ low risk drinking guidelines of 14 units of alcohol a week.

“”Pubs, bars and clubs will be busy with revellers this season, but licensees shouldn’t forget that they’re also employers. They could be asking themselves whether their celebration culture is centred too heavily around alcohol and if they can offer alternative choices at their team Christmas parties.”

The research found one in six UK drinkers (16%) admit to having done something they regret at a New Year’s Eve party because of alcohol. The same percent admit the same at a work party.

More than one in ten (13%) UK drinkers admit they are avoiding social occasions this festive season because of the pressure to drink alcohol.

Drinkaware also found that on average, men admit to consuming six drinks on Christmas Day. Using a common strength pint of beer or medium glass of wine as a measure, this is the equivalent of 14 units of alcohol. Women admit to having on average four and a half drinks on Christmas Day. However, studies have shown that people in the UK tend to underestimate how much they drink; the amount people say they drink represents only about two-thirds of all alcohol sold.*

Elaine Hindal adds, “Pubs, clubs and bars can play an important part in reducing the alcohol harms that arise when people are pressured into drinking too much over the festive season.

“By putting in place some simple measures, operators can help customers to control their drinking, and make sure that those who are choosing not to drink alcohol – whether because they’re driving or for other reasons – feel welcome in their venue.

“These could include: offering an interesting range of low and no alcohol drinks, selecting house wines at the lower end of the ABV scale, and making them available in 125ml serves, and serving food for the same hours as drinks are served.”

Drinkaware also recommends equipping team members to spot the signs of someone who is drinking more than they should, perhaps because of peer pressure. Drinkaware’s Alcohol Vulnerability Awareness e-learning course helps staff to understand what vulnerability means and gives practical advice on how to support customers. For more information contact elearning@drinkaware.co.uk

Finally, if you suspect a customer is buying alcohol for someone who is already drunk – or who is drunk themselves – then selling them a drink is against the law. Drinkaware and the British Beer & Pub Association have produced two posters to help communicate this to customers –  ‘Can’t Get Served’ and ‘Mate’s in a State’, which can both be downloaded free of charge from the Drinkaware website here