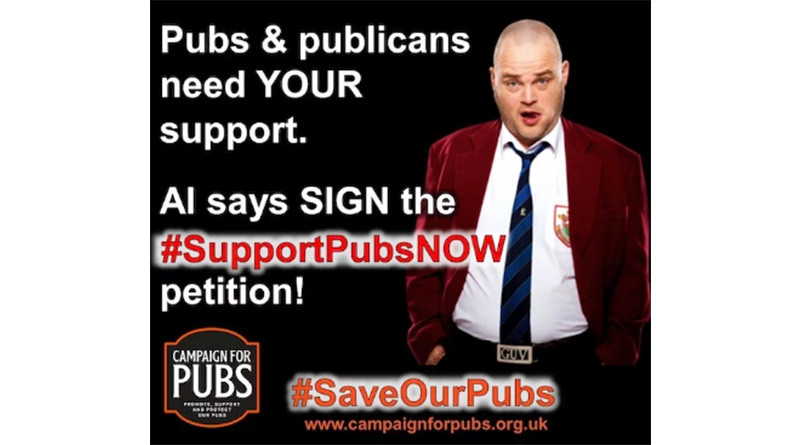 Comedian Al Murray, ‘The Pub Landlord’ has backed the campaign to #SupportPubsNOW with pubs and publicans facing a crisis due to loss of business and ongoing restrictions due to the Covid pandemic. Al Murray’s most famous character is The Pub Landlord and now he is calling for real help for real publicans!

Al, The Pub Landlord, has become an ambassador for the Campaign for Pubs, the national grassroots campaign group representing pubs, publicans and pub-goers and is calling on all UK pub-lovers to sign the #SupportPubsNOW petition calling for an urgent package of support for all pubs to help them survive the winter. The #SavePubsNOW petition, started by Campaign Director Greg Mulholland now has over ten thousand signatures.

Many publicans and pub families are facing real hardship through the loss of their livelihood caused by ongoing closures and restrictions and without some urgent changes to the approach and to levels of support, many pub families face having no Christmas at all. A worrying number are now facing the complete loss of their business and ongoing income, as well as the threat of bankruptcy and in some cases homelessness, especially where the family lives in the pub.

Current levels of support are inadequate, with many pubs racking up more and more debt each week and with the loss of normal December trade (and in many cases, the loss of all trade) this makes it very difficult for pubs to get through the difficult months of January and February. Without more support, many pubs are at risk of closing.

The petition calls for an announce an urgent package of support including:

Al Murray is calling on all who care about pubs – from either side of the bar – to sign the petition and also to join the Campaign for Pubs for just £25 a year.

Al Murray, the Pub Landlord said: “The situation facing our nation’s pubs and publicans is serious and for all of us who care about our locals and the role they play in communities, then they need to show their support.

Greg Mulholland, Campaign Director for the Campaign for Pubs said:

“We are delighted to have Al Murray, the ‘Pub Landlord’ onboard supporting the #SupportPubsNOW petition and agreeing to be an ambassador for the Campaign for Pubs.

“Al has a real passion for pubs and our pub culture and we urge everyone to sign the petition and call on their MP to back support to get pubs through the winter. We also hope more and more people will join the Campaign for Pubs, to give our nation’s pubs and publicans a real voice, a voice that needs to be urgently heard to help pub families and save many beloved locals.”