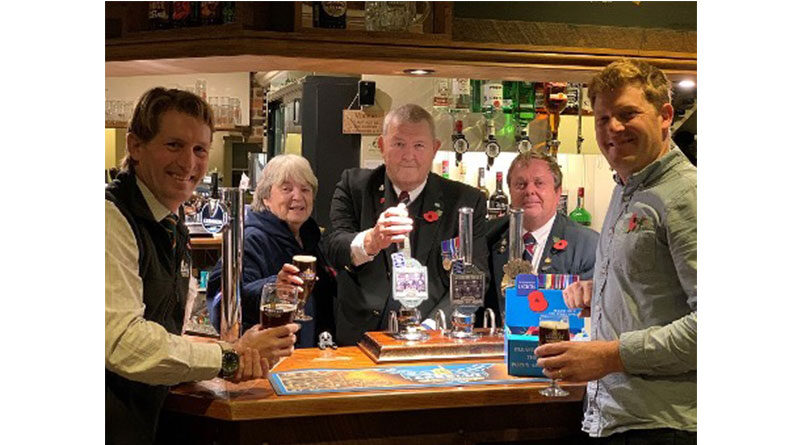 With a long and distinguished history of military service within the Arkell family, the Wiltshire brewery is paying tribute to British forces in this the centenary year of The Royal British Legion.

Arkell’s head brewer, Alex Arkell, said: “This is a perfect brew for autumn; we’ve used chocolate malt for the dark colour, which also adds warm roasted and sweet tones, with a light hop aroma to compliment. At 4% this is considered strong for a mild, but this way we get a little more flavour into the lighter bodied beer.”

The Arkell military connection can be dated back to current Chairman, James Arkell’s great-great-great-grandfather who joined the Second Wiltshire Rifle Corps in 1888.

However, this beers name originates from the nickname given to the British expeditionary force who served in France and Flanders in 1914. Emperor Wilhelm II of Germany reportedly issued an order to “Exterminate… the treacherous English and walk over… the contemptible little army”. Hence, in later years, the survivors of the regular army dubbed themselves ‘The Old Contemptibles’.

Sir Noel Arkell and Graham Arkell fought in WW1 in 1914 and survived, although Noel returned wounded having been shot in the shoulder. They both feature on the beerspump clip design.

Noel’s sons James and Peter fought in World War 2. James served with the Gurkha’s in Burma and Java, where he was killed in action at the devastatingly early age of 26.

His brother, Peter Arkell, served in the RAF, flying Lysanders into France under cover of darkness to retrieve secret agents by moonlight. He later transferred to Burma where he completed many landings behind Japanese lines. After a serious crash behind enemy lines he was finally invalided out of the RAF.

Current Chairman James Arkell was in the Territorial Army and has commanded The Royal Yeomanry Regiment. He is also President of the Swindon Branch of The Royal British Legion.

“We have beer and military service running through the family veins,” says James. “From my great-great-great-grandfather to my son, John, who served in Afghanistan.”

In 1921, The Royal British Legion was formed to support service men and women, ex serving personnel and their families. They are the champions of Remembrance and this year they celebrate their centenary. Alex Arkell has combined beer and military and created ‘Contemptibles’ for this time of year when we remember and honour all those who have died in service of their country.

George Arkell said: “The Royal British Legion is a fantastic charity whom we love to support. This year we are an official sponsor of their centenary cookbook ‘Cooking with Heroes’ with a page dedicated to our brewery amongst the delicious recipe ideas from acting or former members of the military”.