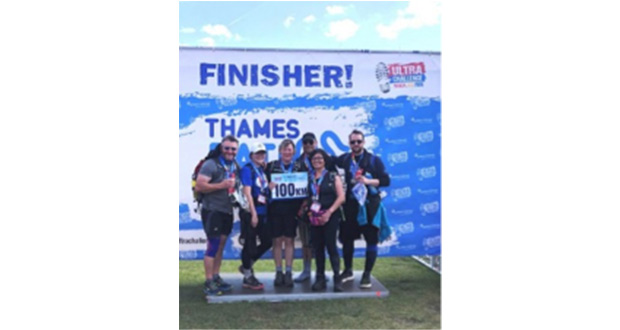 A team from the Brakspear head office in Henley completed the Thames Path Challenge over the weekend, finishing their 100km continuous walk in Henley on Sunday evening. Their efforts – and those of colleagues who completed part of the route – have raised more than £5,200 for Mind, Brakspear’s charity partner this year.

The Thames Path Challenge is an annual event, starting at Putney and following the course of the Thames upstream to Henley, taking in the beautiful riverside scenery as well as historic jewels such as Hampton Court Palace and Runnymede. This year, more than 2,000 people started the challenge, most of them walking, others jogging or running.

Six Brakspear walkers completed the 100 km challenge, starting on Saturday morning and walking through the night without sleep, to finish in Henley on Sunday morning. Four colleagues joined them for the final 22km from Cookham to Henley, and three others pulled out after completing 72km, but their fundraising efforts helped to reach the impressive total collected.

Sue Williams, Brakspear’s Head of People, said: “This was a huge challenge for me and I’m both proud and relieved to have completed it.

“I wasn’t fit when I signed up, so I had to get fit and that was hard; after my early training walks, I ached for days and my feet were covered in blisters. I was determined though, and I became the office cheerleader, encouraging the others to start their training.

“The walk itself was tough both physically and mentally. Walking through the night, cold and sleep-deprived, and knowing you’ve still got a long way to go – that’s tough! Through it all though, there were good times, when we we belly laughed hysterically at ridiculous jokes, or came together to help one another through when it got really hard. And knowing we were doing it all for Mind helped us to keep going.”

Brakspear has been supporting Mind, the UK’s leading mental health charity, for the past year. Pubs have raised money through a range of fundraisers including pub quizzes, music nights and Fun Days, while the head office team have organised a ‘Bake Off’, crazy golf and taken part in sporting challenges such as the Ride100 bike ride.

Tom Davies, Brakspear chief executive, said: “This was clearly a seriously tough challenge and I’m really proud of the team for completing it. The money they’ve raised will be used by Mind to continue the great work they do supporting people experiencing mental health issues.

“The fact that the Thames Path Challenge finishes in Henley made it a clear winner when we were looking for this year’s charity challenge. I’m sure a pint of Brakspear has never tasted as good as the ones the team enjoyed in the pub after crossing the finish line!”

It’s not too late to donate! All donations most welcome at: https://www.justgiving.com/fundraising/Brakspear-bees