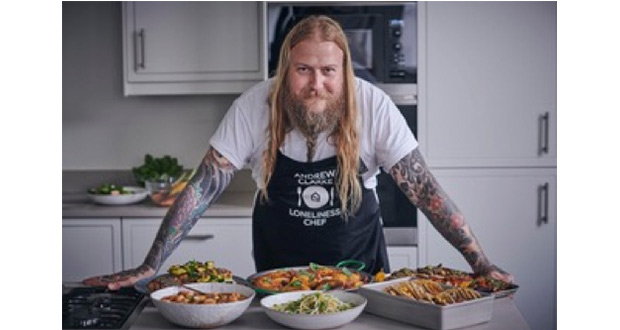 Flatshare site SpareRoom, with the backing of The Campaign to End Loneliness, has appointed chef and restaurateur Andrew Clarke as Britain’s first ‘National Loneliness Chef’. Andrew has created original recipes that encourage cooking and eating together, in a bid to help combat the millennial loneliness epidemic.

Nine million people in the UK suffer from loneliness 1, and a third (30%) of millennials admit they always or often feel lonely 2. In such a connected world it seems people are feeling more disconnected from each other than ever before. However, recent findings from a SpareRoom survey revealed that people who eat together find it improves their mood2 (87%) and has a positive effect on their living environment (88%)3. With this in mind, it seems clear that the benefits of communal eating can help combat social isolation.

Despite the direct correlation between communal eating and social bonding, the survey also shows that many meals in the UK are still eaten in isolation, with a third (33%) of those surveyed admitting they don’t eat together at all, and less than a fifth (17%) eat together regularly.

SpareRoom is committed to tackling loneliness amongst millennials, and in a bid to do so has teamed up with award-winning chef and mental health ambassador Andrew Clarke to create the Food to Share recipe book. Every dish included is inspired by different cultures around the world that are known for communal eating, to encourage young people to cook and eat together to improve their happiness. The Food to Share recipe book can be downloaded here.

As well as being the chef director at St Leonards restaurant in London, Andrew is also co-founder of the Pilot Light campaign alongside fellow chef Doug Sanham. The campaign was created to support people in the catering industry struggling with loneliness and mental health problems.

Matt Hutchinson, Communications Director for SpareRoom comments: “We all know that food brings people together. So, in a time when we hear more and more about young people experiencing loneliness, getting people to cook and eat together is a great way to remind us we’re not alone.

Sometimes you end up living with people you don’t know so well, or you just have different schedules and eating together doesn’t quite happen. It’s important to make time, even just once a week, to sit down with the people you live with and share a meal, a chat, and maybe a bit more of each other’s lives in the process.”

National Loneliness Chef Andrew Clarke comments, “Time spent together over a good meal will unite strangers, deepen friendships and leave people feeling more positive about the world around them. Sharing is at the heart of the recipes I’ve created, and they are simple enough so those who aren’t naturals in the kitchen or have loads of spare time on their hands can still get involved. I hope people will bond over preparing, cooking and eating this food together, and ultimately help those feeling lonely.”

Daniel Pattison, Head of Communications at the Campaign to End Loneliness comments, “We’re often asked ‘how can we end loneliness’? Well, one of the best things we can do is focus on what brings us together – and what better way to do that than by sharing a delicious meal? Research shows that the more we eat together, the happier we are3 so it’s more important ever before that people of all ages find the time to sit down, have a chat and share a meal.”