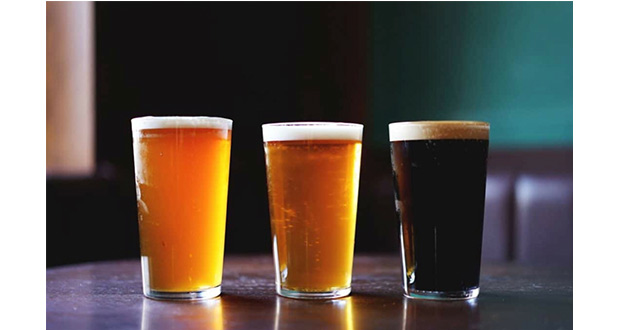 There are more breweries in Britain than there have been for decades – around 2,300. They supply over 50,000 pubs, bars, hotels, restaurants and clubs with cask beers, making over 10,000 different beers available each year.

“It’s not just the number of cask beers on offer that is so impressive,” says Matt Eley, editor of the Cask Report 2019-20. “It’s the variety of styles. The choice of colours, strengths, flavours and aromas just keeps on growing, as people become more adventurous in their tastes and brewers become more experimental.”

Of course, not all in the garden is rosy. There is an ongoing decline in on-trade beer consumption, fourteen pubs a week are closing and the average number of cask brands on the bar has reduced from 4.4 to 2.8 in two years. This means that competition for space on the bar is intense.

“Given the sheer scale of competition, and the level of support available from reputable brewers, it is perverse that there are still pubs that serve cask ale in poor condition,” says Matt.

He points to the fact that 70% of cask drinkers have at some point been served an off pint. “This deters them from going back to the pub (40%) and puts them off the brand (39%),” he says.

As part of the research for the Report, drinkers were presented with cask beers at different temperatures to try. A resounding 95% thought the temperature of those served at the industry recommended 110 to 130C was “just right”.

Yet in July this year, nearly half of pubs without Cask Marque accreditation were serving cask ales at over 140C. “This is unacceptable – not just for the drinkers in those pubs, but for the whole industry,” says Matt.

“Our research showed that licensees who are passionate about beer and proud of their cask ales are angry to see poor pints being served in other pubs. They view it as a grave disservice to everyone.”

The Report contends that premiumisation – in terms of quality, strength and price – offers significant potential to the industry. “This is where the Cask Fight-Back begins,” says Matt. “With premiumisation.”

Cask drinkers spend over £1,000 a year on food and drink at the pub. They are worth looking after. Too many brands and not enough throughput means poor quality. So does serving the beer too warm. A concerted effort to get the range right and serve each and every pint in top notch condition, at the right temperature, helps pubs to keep existing customers and to attract new faces through the doors.

Sales of premium-strength cask beers (4.2% to 7.5% abv) grew in in the last four months versus the same period last year. Licensees should be looking to include them in their range, particularly for evening and weekend sessions when they are most popular.

According to the research, 59% of drinkers think that cask should be more expensive than mainstream lager. Yet, despite being a natural, fresh product, usually made in smaller batches, and with a short shelf life, cask ales are rarely priced much higher than standard lagers.

“The most perplexing thing is the price difference between craft keg beers and cask beers,” says Matt. “Drinkers are paying on average an extra £1.50 per pint for craft keg than they are for cask. Given all that goes into creating a great pint of cask ale, it’s strange that there is so little equivalence.

“The industry can massively reduce this gap. But, to increase profitability in the long term, it has to improve throughput and get quality right.”

As Paul Nunny of Cask Marque concludes, “If you can’t get the quality right, please don’t stock cask.

“Get it right – and build a name for your pub on the back of it. Get the selection of beers right for the size, type and location of the pub that you run. Involve your staff, making sure they are well trained, knowledgeable and enthusiastic, and watch your sales grow.

“As our research shows, that’s what is happening in successful cask pubs where licensees care about their beer.”