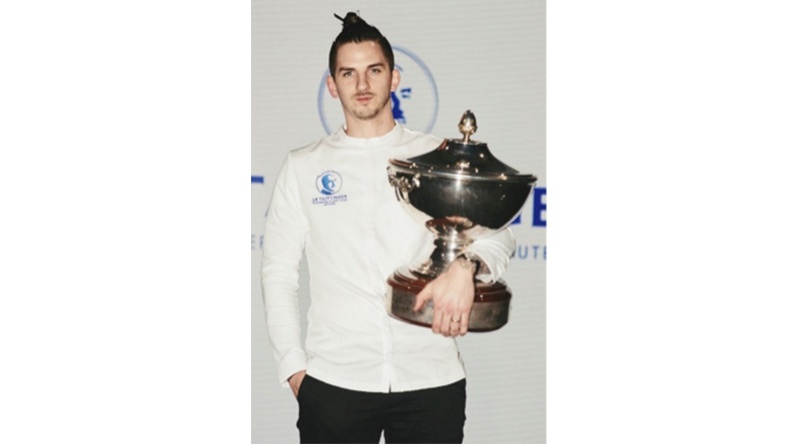 Charles Coulombeau, Head Chef at one Michelin star Gravetye Manor in Sussex, has been named the winner of the renowned Le Taittinger Prix Culinaire International following a closely fought final which took place on 28th January at Ferrandi in Paris.

Vitalie Taittinger presented the trophy at the evening celebration at Elephant Paname in Paris. She was joined by Emmanuel Renaut, President of the competition and Dominque Crenn, the only female chef in America to attain three Michelin Stars for her restaurant Atelier Crenn in San Francisco.

National finalists from Belgium, France, Germany, Japan, the Netherlands, Sweden, Switzerland and the UK fought it out for the first prize of €20,000. This year, the competition took a new format with the chefs celebrating the “hero” ingredient of king scallops at the heart of a signature dish. The chefs used their personal inspiration and flair to design a unique dish that was judged on taste, presentation and creativity. In addition, on the eve of the final, chefs were assigned a second mystery dish, ‘Pithivier de Racines,’ which they then had to prepare on the day of the competition.

Originally set up by Taittinger’s founder, Pierre Taittinger, the Le Taittinger International Culinary Prize was revitalised for 2020 by Vitalie Taittinger, to provide chefs increased freedom to express their creativity and skills.

Vitalie Taittinger comments: “It has been a very exciting year for the competition with the change in format and it has been a total pleasure to also spend time with the chefs in Reims, where we enjoyed the day at Taittinger fuelling their creativity with tastings and workshops. I have had the honour of being part of Le Taittinger Prix Culinaire final for over 10 years and it never fails to amaze me how talented these young chefs are. This year more than ever, the competition allowed their creativity and inspiration to sing and we saw some exceptional dishes.  I know we must have one winner but in my eyes all the contestants who have made it here are winners.”