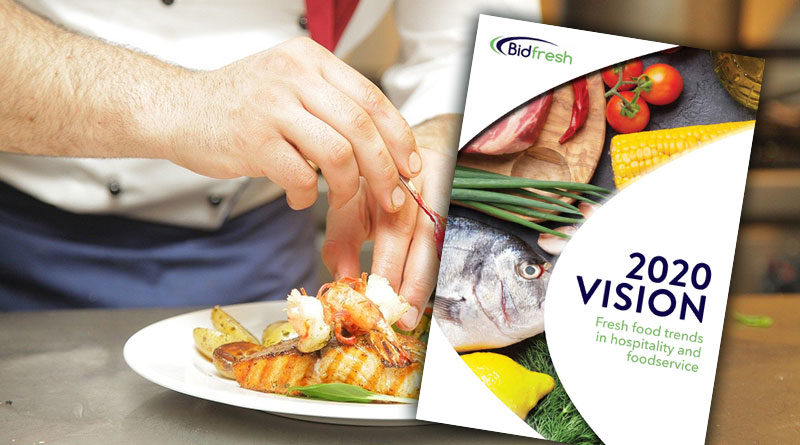 From seaganism to sustainarianism, chefs will have to be ready to embrace an even broader range of customer dietary trends than ever during 2020.

Fresh food supplier Bidfresh is advising hospitality operators to increase the menu choices they offer, as consumers bring an increasingly complex set of values to the table when they eat out.

Bidfresh, which supplies fresh food to more than 15,000 foodservice customers through a combination of regional specialists and national brands, has published a new report, “2020 Vision: Fresh Food Trends in Hospitality and Foodservice”. Using exclusive sales data, the report features insights into the best sellers and rising star products across the four Bidfresh divisions – meat; fish and seafood; fruit and vegetables; and cheese.

While top selling lines such as steaks, salmon and salad are still in demand, sales of newer meat cuts such as the flat iron steak, alternative fish species such as meagre and monkfish, and less familiar veg such as kale and butternut squash are on the rise. Halloumi, the Cypriot cheese widely used by chefs as a meat alternative, has been a star sales performer.

The report also forecasts key menu trends for 2020. Alongside seaganism, a broadly plant-based diet which also includes fish and seafood; and sustainarianism, where the environmental and ethical impact of food production is factored into menu choices, there are a range of other issues chefs will need to be ready for in the year ahead.

Stephen Oswald, chief executive officer of Bidfresh, says: “Eating out is increasingly as much about value as it is about cost; not just value for money, but the values that an operator brings to the menu. These ‘sustainarian’ customers increasingly want to be sure that the food they eat has been produced sustainably and ethically, and they also curate their own food choices very carefully.

“So, while some consumers fully embrace the plant-based trend, others are looking for that ‘seagan’ combination of seafood and plant-based dishes, which is an area where we’re seeing a great deal of menu innovation from customers, and have also been building our own online recipe bank.

“There are others who have cut back on meat, but when they do eat it, expect a premium product with provenance. Bespoke burgers continue to be an important trend, and we’re also expecting many more recipes which feature meat combined with plant ingredients to appear on menus in 2020. From jackfruit to halloumi, there’s a huge amount of innovation from chefs in these areas.

“You can’t ignore economic factors either, and one clear trend is operators looking carefully at different cuts and portion sizes, as well as making the best use of food, which can be anything from crispy fried fish skin served as a bar snack to vegetable and fruit peelings and stalks used to make smoothies. This has the added benefit of reducing food waste.”

On-trend ideas identified the report include