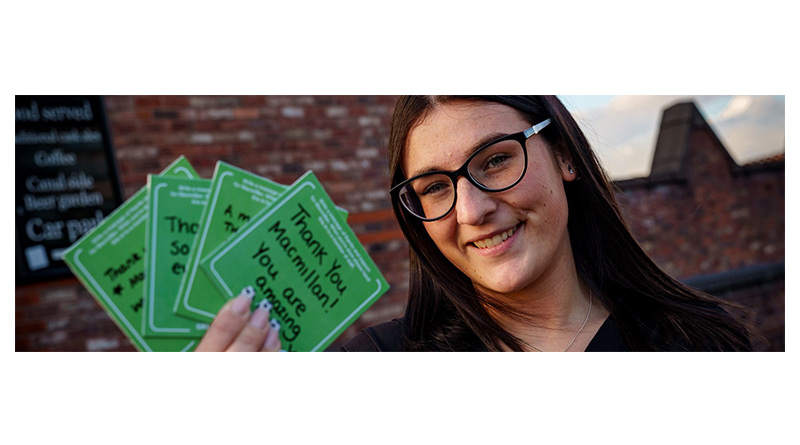 This month, Greene King customers will be able to submit their personal messages of thanks to Macmillan Cancer Support.

From 30th September – 8th October, customers at selected pubs will be able to write their very own messages of gratitude for the invaluable work of Macmillan nurses and healthcare professionals on custom-made Macmillan beer mats.

The heartfelt messages of thanks and support will be added, collage style, to an impressive 10ft super-sized thank you card and delivered to the Macmillan team at Northampton General Hospital, as a symbol of appreciation.

Greene King, is running the thank you campaign nationwide to show gratitude to Macmillan from customers and teams.  These personal messages of thanks and admiration are alongside several fundraising campaigns currently taking place across Greene King pubs including customers and team members taking part in Brave the Shave live events over August bank holiday weekend – fundraising by shaving their heads in front of family and friends in their local pub to support those living with cancer.

When Greene King first partnered with Macmillan in 2012, they set a fundraising target of £1m in the first three years, which was hit and exceeded with a year to spare. Since then, over £9m has been raised thanks to annual fundraisers, donations on desserts, team member challenges, Coffee Mornings and via Pennies, the digital charity box.

The creation of custom beer mats will allow customers to write their own personal messages of support for Macmillan nurses and will be available in over 600 local pubs nationwide. To find all participating Greene King locals, visit the pub finder page here.

Alison Ramsay, Corporate Responsibility Executive at Greene King said: “We’ve been supporting Macmillan since 2012 and in that time our amazing teams have raised more than £9m which has been able to make a real difference for those living with cancer.  However, this September, along with fundraising, we want to show our heartfelt appreciation for Macmillan, so we’re creating hundreds of personal messages from teams and customers across the UK.”

Rachael Gascoigne, Senior Partnership Manager at Macmillan Cancer Support said: “This is such a lovely gesture from Greene King customers and team member. The thank yous will mean so much to our Macmillan nurses and healthcare professionals who work tirelessly in their local communities to support people living with cancer – and to know just how much they are valued, especially after such a difficult time.”