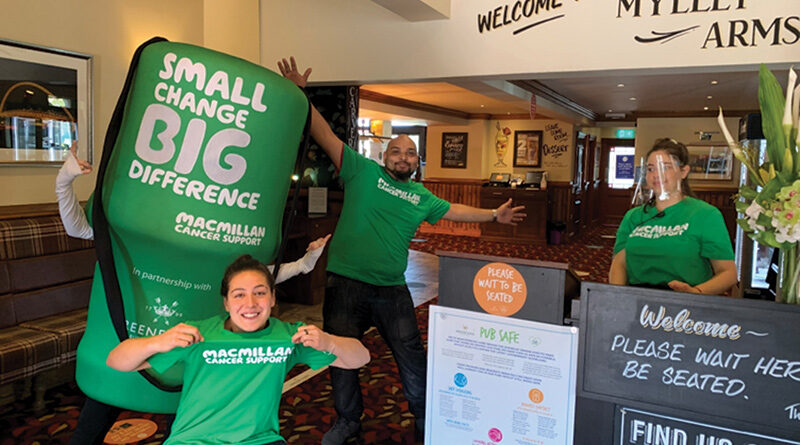 Greene King teams have smashed their annual fundraising record for charity partner Macmillan Cancer Support – despite spending a significant portion of 2021 in lockdown.

The record follows news that earlier this year Greene King passed the £10m milestone of money raised for Macmillan since the partnership began in 2012.

Fundraising for the charity has accelerated in recent years with £1m raised in the first two years of the partnership, before going on to pass £3m raised in 2017, £5m in 2019 and then more than doubling that amount in less than three years. The money raised by Greene King will help Macmillan continue to provide vital support for those living with cancer.

Latest figures from PubAid estimate that pubs raise around £100m annually for charities across the UK, showcasing the importance and value they bring to communities by supporting good causes.

Greene King CEO Nick Mackenzie said: “It’s hard to put into words just how proud I am of every member of the Greene King team who has gone above and beyond this year to raise this incredible amount. Not only has it been a phenomenally challenging year to run a pub through a variety of restrictions and challenges, but to then go out in addition to doing the day job and put on charitable events and undertake epic challenges truly is inspiring.

“It reminds you what an important role pubs play in communities and highlights how closing pubs has repercussions not just on the businesses and customers but the wider causes and communities they support as well.”

“We are extremely grateful for their continued support and for raising such a phenomenal amount in an especially challenging year. At Macmillan we rely almost entirely on donations from the public and passionate corporate partners like Greene King. Without this generosity we simply wouldn’t be able to fund the Macmillan professionals and services that support people with cancer in communities across the UK when they need it the most. Thank you”.