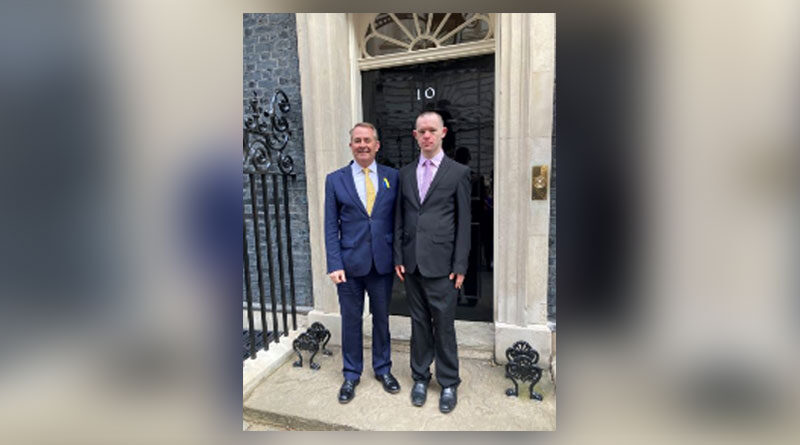 A student with Down Syndrome at Aurora Foxes Academy in Minehead was the inspiration behind a groundbreaking bill which has just passed its Third Reading in the House of Lords – the final stage before it passes both chambers.

Freddie Tall, 23, is non verbal and is currently in his final year at Foxes studying hospitality and catering.

MP Dr Liam Fox put forward the Down Syndrome Private Members’ Bill after he met Freddie, one of his constituents, and his mother Annabel Tall who has been campaigning for disability rights for over 20 years.
The Bill is intended to make it easier for those affected to secure the services they need and to challenge authorities not acting on their duties.

“Freddie was one of the first children with Down Syndrome to go through education with the security of a legally enforceable education plan,” said Annabel who has been working on the Bill with Dr Fox’s team.

“Despite that, we have encountered numerous hurdles and difficulties. It’s been hard to get diagnosis and treatment for medical conditions and has been very hard to simply have the life included in society that most take for granted. As he moves into adulthood, the bill will make it easier for Freddie to find the provision and opportunities he needs and will provide the foundation for those following us to experience an easier path.”

Freddie worked enthusiastically with other young people with his condition to support the Bill – meeting MPs, helping with information sessions and supporting an event at the Houses of Parliament on World Down Syndrome Day on 21 March.

Once the Bill receives Royal Assent, it will pass into law and mean the establishment of a Down Syndrome Act which will be the first of its kind in the world.

The next stage will be the formulation of the Guidance under the Act which will involve full consultation.
Thanks to this and his training at Aurora Foxes, Freddie has acquired a raft of qualifications and skills to help him secure work in the hospitality industry.