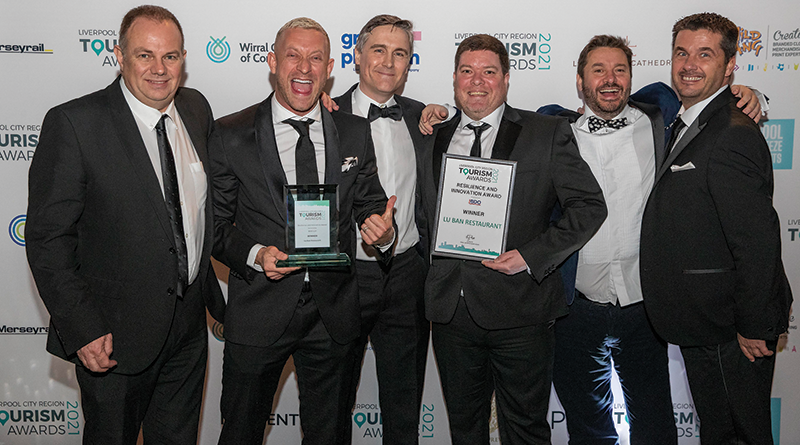 Lu Ban Liverpool has been crowned the city’s best restaurant after being one of the big winners at the 2021 Liverpool City Region Tourism awards.

The fine dining Chinese restaurant, based in Liverpool’s Baltic Triangle, walked off with the highly prized Restaurant of the Year award and doubled up its trophy haul with the Resilience and Innovation award.

The ceremony was held in Liverpool Cathedral on Thursday 10th March, with a strong team from the restaurant present to collect the awards. It was the first ‘in person’ ceremony for three years after the previous two awards ceremonies were held online.

On being named the best restaurant in Liverpool, Lu Ban executive head chef Dave Critchley said: “This was a huge icing on the cake for us. It is a huge credit to the team who have worked under some incredibly difficult circumstances. We’re still a relatively new restaurant and this is a very difficult award to win. We were up against some top, top well-established restaurants in Liverpool and this one is won on merit.”

The Innovation and Resilience award recognised the work Lu Ban did during lockdown. It launched UK wide home-delivery service Lu Ban Kitchen, created Liverpool Independent Delivery Service (LIDS) which worked with a range of businesses in the city. Lu Ban also got involved in a number of charity initiatives.

Critchley added: “During lockdown we were creating new businesses, employing people who were out of work at the time, we helped generate revenue for up to 37 local businesses as well as cementing our future.

“The award also recognised all our work in the community and getting food out to people who needed it through LIDS, the Well Fed Food Project, the food banks and Knowsley Kitchen.

“This was a very significant and poignant award for us as it recognised everything we did through lockdown. To get that recognition from the city is absolutely amazing.”