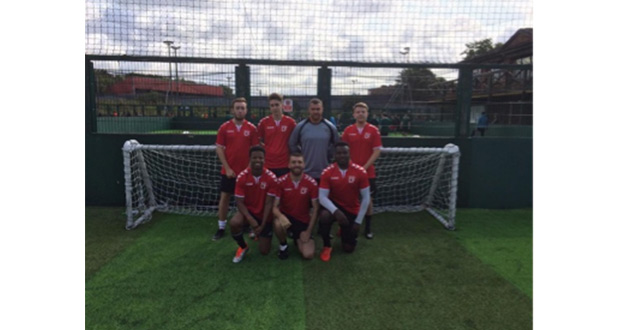 More than 150 people from Manchester’s thriving hospitality scene took part in a football tournament to raise funds for charity.

The 2019 Manchester Hoteliers’ Association (MHA) 5-a-side competition was held at the weekend at the Power League site in Ardwick, with money raised going to Hospitality Action.

Staff from Hotel Football were victorious, defeating employees from DoubleTree Hilton Manchester in a gripping final.

Sixteen teams took part in the annual tournament, which has become a key fundraising fixture in MHA’s calendar of activities.

“The tournament couldn’t have gone better,” said Matt. “All the teams put in some brilliant performances and the whole day was a credit to not just Manchester’s hospitality offer, but the people who work in our industry.

“For more than 150 people to give up their Sunday to raise funds for a brilliant charity like Hospitality Action is a fantastic effort.”

Hospitality Action has supported people who work or have worked within hospitality in the UK and find themselves in crisis, for 180 years.

Dawn Holding, Hospitality Regional Co-ordinator, North, said: “I’d like to thank Matt and Rachael Fitton for organising this event over the past few months, as well as all the players for giving up their time to compete in a wonderful tournament.

“It’s events like this that contribute significantly to the work we do. We’re really looking forward to finding out how much was raised and want to congratulate all the teams for their efforts.”

MHA is a non-profit organisation of the key hotels within the city centre and the Greater Manchester area. It is chaired and managed by the hotel General Managers and the MHA is dedicated to promoting and developing the hospitality and tourism industry in Manchester.