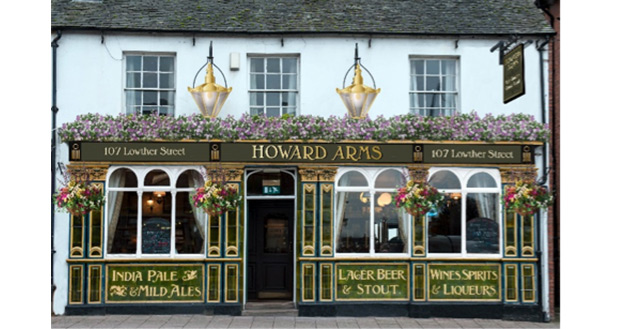 A unique period of pub history has been brought alive at The Howard Arms in Carlisle, which reopened this week after a £330,000 refurbishment by Star Pubs & Bars and award-winning multiple operator, Dianne Irving.

The pub now commemorates the period from 1916 to 1972 when the Government took Carlisle’s pubs into state management* in a bid to curb excessive drinking in the city. Everything in the pub from the menu to the furniture harks back to the early days of that time and has a 1920s feel.

The idea was the brainchild of Irving, who has two other pubs in the area, including the White Mare at Beckermet, which is also with Star. “It’s a fascinating and little known part of pub history which changed the face of Carlisle’s pubs. Civil servants ran all pubs following strict rules; beer’s alcoholic content was reduced, food and activities introduced, coffee and cakes stocked and women encouraged to visit. As one of the last remaining traditional pubs in the city centre I thought it would be fun to recreate those days and give The Howard Arms a point of difference as a place of historical interest.”

The investment sympathetically restored the Grade II listed building whilst installing a new kitchen on the first floor to make extra trading space. Stepping into The Howard Arms is now like stepping back into the early days of state managed pubs; the furniture is 1920’s, state management bric a brac and memorabilia provide decoration and staff wear collarless shirts, braces and flat caps. The menu offers traditional home cooked British food like spam fritters, mince and dumplings and treacle sponge. The activities have a 1920s bent too, with games such as cribbage and skittles, a piano for sing-alongs and quoits and Aunt Sally in the garden.

Says Dianne: “I approached Star with the idea and they loved it. It has been a good partnership – they’ve supported me throughout and given me the freedom to bring my vision to life. We’ve taken The Howard Arms back to the 1920s but we’re also serving modern ‘essentials’ like Prosecco and barista-quality coffee.”

Irving – is now looking to expand further with a view to having five leased pubs in and around Carlisle. Says Dianne, “Having lived in the area for the last 30 years I’ve got a good local knowledge which helps identify strong pub business opportunities. Leased is the way to go as far as I’m concerned as I don’t want to put capital into a freehold.”

Adds Star Pubs & Bars operations director, Gary Corney: “Dianne is a great licensee and very creative. We’ve been delighted to support her in this new venture. There’s nothing like The Howard Arms in the city, it’s a fantastic addition and a destination venue.

“Carlisle is a regional centre, with lots to offer residents and visitors. We’re pleased to be investing £550,000 in the city’s pubs this year as part of our nationwide £50 million pub investment programme.”