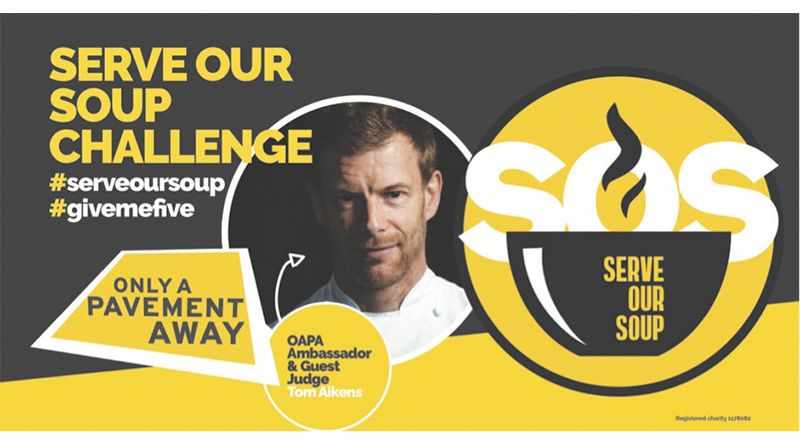 Only a Pavement Away, the charity that supports people who are facing homelessness into jobs within hospitality, is raising funds through a new campaign, the ‘SOS Challenge – which, in association with Tom Aikens, is encouraging everyone to get creative in the kitchen and make a five ingredient soup, to raise awareness and much needed support for the charity’s Hospitality Against Homelessness campaign. The ‘SOS Challenge’ will launch on 17th November and run until 11th December, with the winner announced on the 16th December 2020.

The campaign is calling for support to save the souls of the brothers and sisters in the hospitality industry who have been pushed into a life of rough-sleeping and homelessness, and in order to support them, the charity is asking the people of the UK to create their tastiest five ingredient soup recipes and take part in the #ServeOurSoup social media campaign. Competitors will be encouraged to donate at least £5 to in support.

The winning soup will be selected by renowned Michelin star chef, and OAPA ambassador, Tom Aikens, and will be included as a starter on the menu at the annual Cook and Dine Event in 2021.On top of this, the creator of the best soup will also win two seats at the fundraising event for them and one guest.

Greg Mangham, Founder of Only a Pavement Away, said, “Not only are we looking to raise much needed awareness and funds for the Hospitality Against Homeless campaign, but also give furloughed chefs and individuals the opportunity to do something creative, with the chance to win a prize for their own personal achievements. It also seemed ideal to create a campaign where those sleeping rough would also benefit, nothing better than a hot soup or broth on a cold day”.

Only A Pavement Away are also calling on as many restaurants, pubs, bars and cafés to “Serve A Soup” as part of the SOS Challenge, with a percentage of sales going towards the Hospitality Against Homelessness fund. Please get in touch with the team at OAPA here from 16th November, for an opportunity to get your business involved in such a valuable initiative, raising crucial funds to get rough sleepers back into employment and safe living conditions.

To officially enter the competition aspect of the initiative, individuals must share their soup recipe using no more than five ingredients, along with an image, on their Instagram grid, donate at least £5 to the fund using the donate button on the OAPA Instagram page, and encourage friends and family to take part. For individuals that are not on Instagram, there is the option to send in your recipe and make a donation by visiting the OAPA website. The charity also recognises that due to the current pandemic, not everyone is in a position to make a donation, however it’s still encouraging everyone to take part in creating a recipe and spreading awareness of the campaign.

Only A Pavement Away ambassador and Michelin Star chef, Tom Aikens, said, “Following the success of the charity cooking challenge we launched earlier this year, and now with the industry once again facing such extreme pressure, there is no better time than now to bring the hospitality community back together, getting members of the public and furloughed chefs alike to put their aprons on and help raise funds for such an essential cause”.