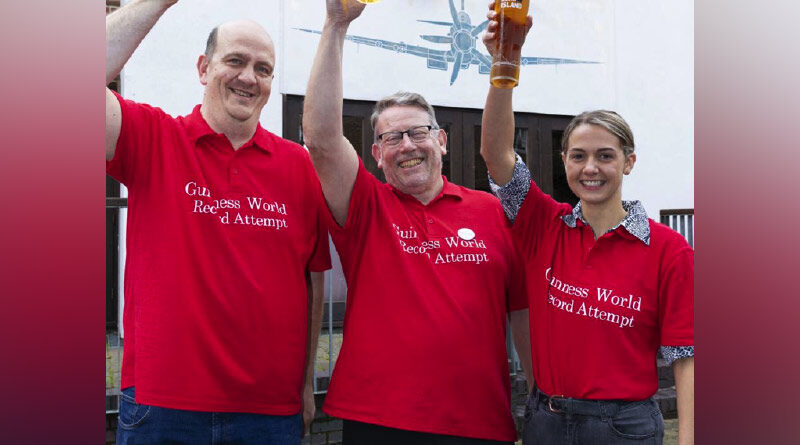 A Shepherd Neame pub manager who set himself the challenge of breaking the Guinness World Record for the most pubs visited in 24 hours had to up his game not once but twice after rival attempts increased the hostelry haul he needed.

Chris Peach, the General Manager at the Faversham-based brewer’s Spitfire pub in Kings Hill, originally planned his world record attempt needing to visit more than 56 pubs in the one day slot.

But when that record was broken, he and Spitfire regular, wingman Adrian Burke, who provided the organisational skills for the challenge, changed their date, route and number – only to discover during the attempt on Saturday (October 29) that an Australian had added to the numbers needed even further.

It meant they needed to visit 78, consuming a 125ml drink in each pub – it does not have to be alcoholic – and so found themselves searching for extra watering holes, adding a cocktail bar and a virtual reality bar to their tally, alongside the planned pubs.

It meant that by Sunday when they arrived at The Spitfire, cheered on by team members and regulars, that they had hit the magic number needed.

Chris, who has been General Manager at the pub in Liberty Square for six years, and with the independent family brewer for 16, said: “We found ourselves literally running around Victoria looking for pubs! It was very tiring, but good fun.”

The pair, also assisted by former Spitfire team member Jodie Butcher, wore red and white t-shirts promoting the challenge and the GoFundMe page they were fundraising for, which helped provide a warm welcome at every stop.

Adrian said: “Every pub we went in to, everyone was talking about it. People saw the t-shirts and so knew what we were doing. Because we had the GoFundMe link on the back, it also meant we got some donations as we went round.”

The funds will go to help Chris’s niece, Amelia Rose, who was born with a cleft lip, and lives in Africa, to receive surgery at Great Ormond Street Hospital.

The pair, along with Jodie, must now collate their witness statements and receipts and submit them to find out if they qualify for the world record, which is likely to be an anxious four to six-week wait.