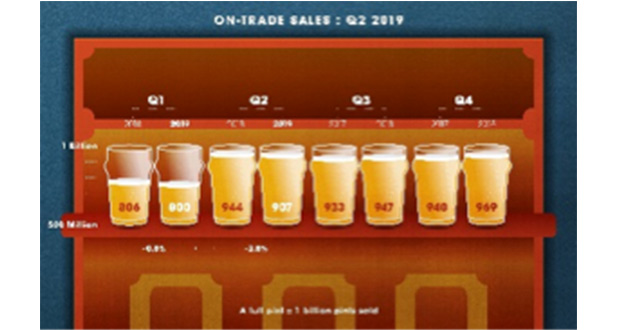 Beer sales in the second quarter of 2019 were down 2.2% on the same period in 2018, according to the latest Beer Barometer sales data from the British Beer & Pub Association.

The slump was driven by falling beer sales in what is known as the on-trade, otherwise referred to as pubs and bars, which decreased by 2.8% on the same period in 2018.

Sales of beer in the off-trade, which refers to outlets such as supermarkets and off-licence shops, also fell – decreasing by 1.7% on the same quarter in 2018.

The BBPA has highlighted that the decline was against a particularly strong Q2 2018, where sales were boosted by a long period of good weather and the group stages of the World Cup. Beer sales in the on-trade, however, remain under considerable pressure generally with pub numbers continuing to decline as a result of high taxes including beer duty.

The BBPA has been clear that measures need to be taken by the Chancellor to at the very least cut, or if not, freeze, beer duty in the Budget. Without doubt this will help many community pubs to survive, it says.

At the moment, public finances include an inflation linked increase in beer duty. The BBPA is therefore continuing to support the “Long Live The Local” campaign – from Britain’s Beer Alliance – which is calling for a cut in beer duty to decrease the significant cost pressures pubs face and help give them a boost. The trade association also supports action on business rates, which it claims are overdue for reform.

“Britain’s beer industry is a world-class manufacturing sector. Together, brewing and pubs support 900,000 jobs in towns and villages across the UK. As the nation’s favourite alcoholic drink, it is important that the Chancellor supports beer and the pubs that serve it in their local communities.

“We know that cuts and freezes to beer duty make a big difference in helping pubs and boosting beer sales. There is a very real threat, however, that the Chancellor, Sajid Javid, will increase beer duty at the next Budget.