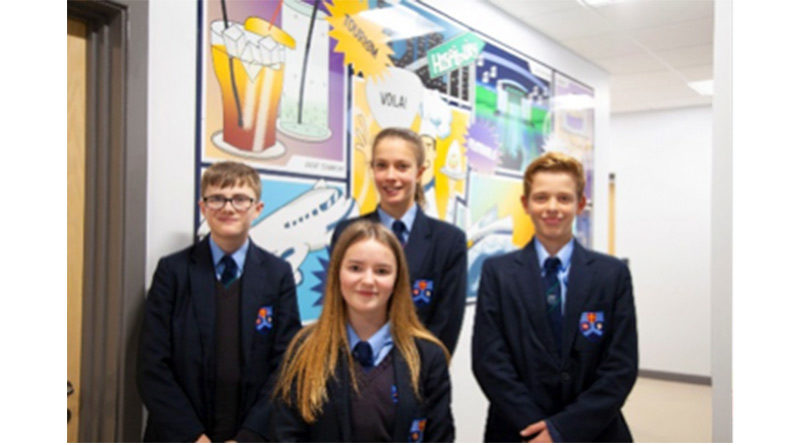 A mural created by local school children aimed at challenging misconceptions about a career in the hospitality industry has been unveiled this week, thanks to the help of a luxury hotel.

Year 7 and 8 pupils at Tewkesbury School in Gloucestershire, were set a competition by their teachers and staff at Tewkesbury Park, a luxury hotel in the town, to create an illustration depicting the hospitality industry in order to raise awareness of the many elements involved in it.

The winning entries were then turned into a mural, which has been installed in the school’s design and technology block. It was officially unveiled on Monday, 18th November in front of the winning pupils, Matthew Barnes and Samuel Wrightson who are now in year 8, and Chloe Sheppard and Daisy Johansen, who are now in year 9.

Helen Butt, design technology teacher at Tewkesbury School, said: “Students don’t always have that wider view of the fact that hospitality is this amazing industry that can lead to an amazing amount of different vocations. It’s really important for students to understand there’s a wider world out there.”

The school works closely with the hotel to promote the hospitality industry, with chefs coming in to host demonstrations and students taking part in work experience placements, to help inspire them by putting their skills into practice in a real life environment, with people they can relate to.

Claire White, director of Tewkesbury Park, said: “The overall idea behind the partnership between Tewkesbury Park and Tewkesbury School was to allow the students to look at hospitality beyond the obvious hospitality roles that you’d automatically think of. The mural is fantastic, the students have worked so hard to create it, it’s colourful and it really brightens up the space while also being informative and able to generate conversation about what it’s all about.

“As a local business, the closer the relationship we have with the local community and local schools, the better. It’s fantastic that we can be involved in projects like this, to help encourage people to consider coming to our hotel as guests or potentially even as part of our team in the future.”

Patrick Jones, general manager of Tewkesbury Park, added: “Work experience is really important. It tells an employer that the person has a discipline, that they have taken the opportunity to understand more about what the world of work is about.

“There’s a huge amount of jobs associated with hospitality, it’s a fabulous industry to be part of. This project got the students thinking of the real benefits of working in the industry, a sector they wouldn’t really think about. I think it’s absolutely crucial to work with children at school age to introduce them to the breadth of the hospitality industry. Hospitality is not seen in the world of education as the career that it could be. It’s about inspiring them as to what the hospitality sector could be and could be for them.”