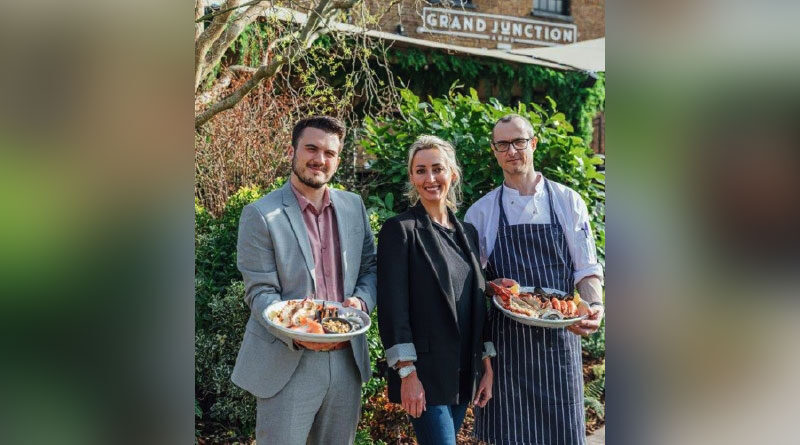 This week saw the opening of Seafood Pubco’s The Grand Junction Arms in Tring, following a six-month, £1.2m redesign and renovation.

The Victorian canal-side pub, which the locally based premium pub company purchased last Spring, has always been high on the wish list of Peter Borg-Neal, the founder and executive chairman of The Oakman Group, who admitted that he had always wanted to own the site.

Peter said: “This was bubbling away in the back of my mind for some time. A long time ago, my son, Eamonn, and I had discussed what we’d do to improve it after years of insensitive piecemeal alterations. Whilst we knew the building and the garden would require a great deal of work, we could see the potential and when I showed it to Joycelyn, she was convinced it would make an excellent Seafood Pub.”

He added: “The SPC acquisition has been a great success for The Oakman Group. As expected, it has been a good cultural fit and the business has seamlessly merged into the Oakman family. The pubs are trading well and present a new dimension to our expansion plans for the future. In Joycelyn and Oakman MD, Alex Ford, we have two of the most talented young operators in the country heading up our two key brands under the astute guidance of our CEO, Dermot King.”

Reflecting on her first year as a divisional MD at The Oakman Group, Joycelyn Neve said:

“I have really enjoyed becoming part of the Oakman family and it is great to be surrounded by people who are on my side and know what they are doing. It’s been a busy and very rewarding 12 months. We relaunched the six original Seafood Pub sites back in May 21 after significant renovations and investment in the properties. Trading in those six pubs is 21.5% ahead of pre covid performance, and we are delighted with the results.

“We converted The Pointer at Brill in Buckinghamshire into a Seafood Pub in October – our first site in the South – which is also trading ahead of expectation. This week’s opening of the Grand Junction Arms brings us up to eight and we have another two sites in the immediate pipeline – one in Buckinghamshire and another in Lancashire.

“Consequently, this is an incredibly exciting time for the Seafood PubCo. Combining what was always a great brand with the best-in-class team at Oakman has given us the bandwidth and firepower to achieve the growth and results we are delivering. The Grand Junction Arms will be the biggest investment in a Seafood PubCo site to date and we are very optimistic about what we can achieve here.

“With the opening of The Grand Junction, we have also launched our new brand imagery. We have utilised the traditional Seafood PubCo blue and white palette but have updated the typeface and added our new brand promise of – Serving Food from Land & Sea. It looks superb and I am looking forward to seeing the signage outside of all our Seafood Pubs very soon.”

Joycelyn added: “The opening is particularly significant being in Tring where Oakman began, and with Éamonn Borg-Neal, Peter’s son, being the General Manager. After 10 years in the Oakman Inns estate, Éamonn is ideally positioned to be a key part of our growth in the South.”